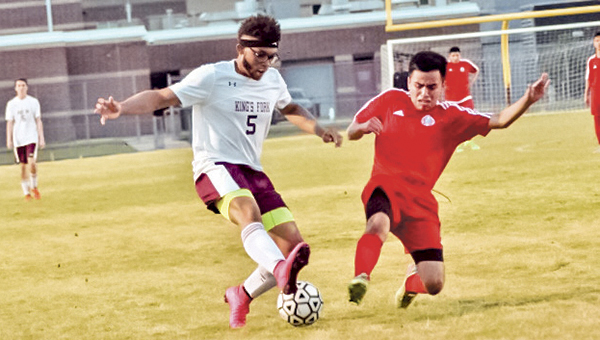 King’s Fork High School’s Drequan Wilson protects the ball against a defender in a prior game. Wilson received first-team All-Conference 17 honors this season.

Coach Michel Bilé said he was not shocked by the selection.

“I was not surprised at all,” said Bilé. “Different coaches from within the different schools make the selection, and you can’t pick your own players. You present your players and they will present a verdict.”

Drequan Wilson and Kenwood Harris are team captains and are seen by Bilé as being players that bring great atmosphere and drive to the team.

“They are both seniors and great contributors,” said Bilé. “They helped the team generate two to three more wins than last year.”

Upon hearing the news that he was selected, Drequan Wilson was ecstatic.

“It was an honor,” he said. “This showed that my hard work had paid off and that I was actually getting better as the season had progressed.”

Drequan Wilson was a big scorer for the team this season, and his brother, Deshaun Wilson, was not surprised that he had received the award.

“He definitely deserved first team,” said Deshaun Wilson. “He worked hard for that,”

Deshaun Wilson is also a captain, and Caleb Harris is considered one of the leaders on the field. Everitt Kyle also stands out as a good defender.

“I felt like I put in the work to get it and I was happy that I got it,” Deshaun Wilson said of his second-team honor.

Bilé said when he found out his players had been awarded, he congratulated them.

“You did a very good job, and keep up the good work,” he aid.