Suffolk Fire & Rescue were able to get a horse out of a ditch Friday evening. 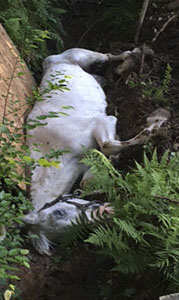 This horse was rescued from a ditch Friday evening. (Submitted Photo)

The 39-year-old Arabian fell into a three-foot ditch in the 200 block of Babbtown Road, according to a city press release. The incident was reported at 6:49 p.m.

Capt. James Broglin said the horse, named Effendi, was lying on his side on the ditch when they arrived. They were able to perform a technical rescue to maneuver the horse upright, and the horse was up and walking when the veterinarian arrived.