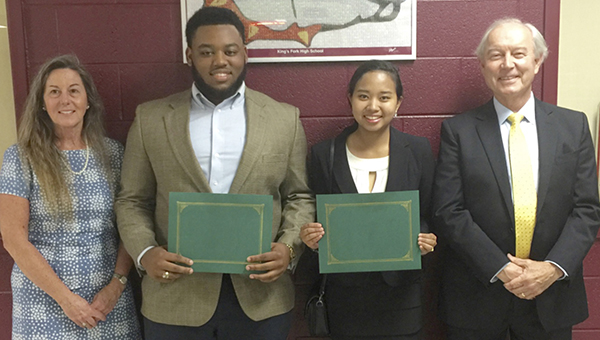 The anonymous donor solved the problem by contributing $5,000.

The Mast Scholarship was established in 2007 to honor Howard D. Mast, who helped thousands of Suffolk youth as Suffolk’s Parks and Recreation director from 1947 to 1966. Most will remember him for creating from scratch a public tennis program that produced state, Mid-Atlantic and even nationally ranked tennis players, both girls and boys.

He was effectively the farm team for Suffolk High School’s six straight boys’ state high school tennis championships. But Mast touched the lives of many more youth through other athletic and non-athletic activities; evening sock hops at the Birdsong Recreation Center; fun and games at parks; midget and junior football, basketball, baseball, track and field; dancing and indoor skating at the old city hall gym; and much more.

Reyes learned tennis on the Howard Mast Tennis Courts behind Farm Fresh starting in the fourth grade and went on to play varsity girls tennis at King’s Fork High School all four years, captaining the team her junior and senior years. The Award Committee was particularly touched by her essay, which captured the essence of Mast, his character and what he stood for.

Bush played both varsity boys football and baseball at King’s Fork. The Award Committee was also touched by his essay, which spoke to character in the face of uncertainty and the tragedy he had to face when “life happened” halfway through high school. Mast would have been proud of how Bush responded, achieving in both sports and academics.

Reyes excelled in academics as well as in tennis. She earned Academic Honor Roll all four years; UVA Jefferson Book Award; Virginian-Pilot Scholastic Achievement Award; National Honor Society 10th, 11th and 12th grades; held class rank third out of 250; among other achievements. She was vice president of the Student Council and was also active in extracurricular actives and community service. She will attend the University of Virginia in the fall, majoring in biology on the pre-medicine track.

Bush also excelled in academics. He is an Honor Graduate; held class rank eighth out of 250; highest grade point average in elementary school; second highest grade point average in middle school. He is president of the senior class; serves others in Youth Empowered to Serve; volunteered for Special Olympics; is a member of Fellowship of Christian Athletes; a member of Men of Iron; and worked part-time at the Suffolk YMCA mentoring younger children. Bush will attend East Carolina University in the fall, majoring in engineering.

All members of the award committee were among the thousand or more young beneficiaries of Mast’s tennis and other programs.

If you’d seen Bobby Godfrey at the moment he discovered he’d won $100,000 in the Virginia Lottery’s Cash 5 game,... read more