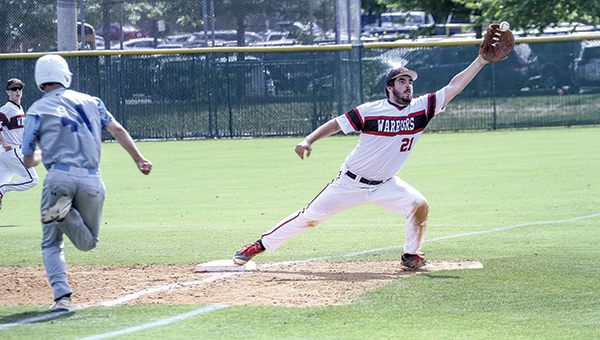 Nansemond River High School’s Michael Holt catches the ball to force the runner out during Friday’s state semifinal game against Potomac High School. The Warriors beat Potomac 3-1 to advance to the state championship game on Saturday.

Michael Blanchard, PenSouth conference player of the year, had another good game. He threw for seven innings, giving the opposition only one unearned run, picked up in the first inning.

Stuffel is ecstatic that his team has made it this far in the tournament.

“It’s awesome,” he said. “When we started the season, our goal was to get to this point, and we’ve made it. The guys really want it, and I know the other team’s going to want it, so whoever plays better is going to come away with it.”

It was a low-scoring game but Stuffel was proud of how his team performed.

The teams were tied in the fourth inning, but Nansemond River was able to score again, giving the Warriors a much-needed lead at 2-1 heading into the fifth.

“He was very, very good for us defensively today,” Stuffel said. “He had a play where he went back in behind second base, slipped and still threw a good ball to first.”

Nansemond River was excited and hit its groove. Stuffel just wants his players to continue to do what they’ve been doing and not deviate from what has worked.

“They played very well,” he said. “We’ve played better games than we did today, but we played a good solid baseball game.”

After the game the guys were happy, but they knew the big prize would be winning the championship. Stuffel recognized how poised his team was upon the afternoon’s victory.

“They acted like they’ve been there before,” he said. “They celebrated a little bit, gave high fives and chest bumps, then shook hands and got ready for tomorrow. I told them, ‘Good job; one more left.”

The Warriors have been consistent throughout the season, and it shows in their play.

“The expectations haven’t changed, we have one game left and it’s a big one,” Stuffel said. “Hopefully we can win that one, too.”

The Warriors will play in the Group 5A state championship game against Mountain View High School in Fairfax at 3 p.m. Saturday.