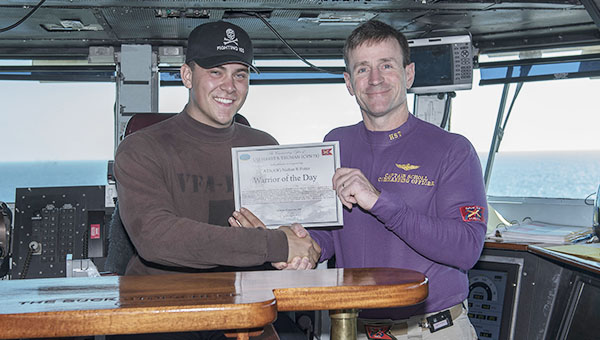 Petty Officer 3rd Class Nathan R. Potter of Suffolk was recognized as the USS Harry S. Truman’s Warrior of the Day on June 8, while the aircraft carrier is cruising in the Mediterranean Sea.

The title is awarded to sailors demonstrating superior performance in the line of duty. The Air Wing’s Warrior of the Day is selected from 2,000 sailors assigned to Carrier Air Wing 7 and is recognized by Truman’s commanding officer, Capt. Ryan B. Scholl.

Potter, a graduate of King’s Fork High School, has served in the Navy for three and a half years as an aviation electronics technician.

He was selected for his outstanding performance while serving as a Strike Fighter Squadron VFA-103 plane captain onboard Truman. He was vital in the coordination of the safe launch, recovery, fueling, defueling and inspection of aircraft assigned to the squadron, while aggressively pursuing his enlisted aviation warfare designation during his off-duty time.

By performing his duties in an exemplary and highly professional manner, he set the standard among his peers in professionalism, motivation and military bearing.

VFA-103, known as the “Jolly Rogers,” is an aviation unit of the U.S. Navy located at Naval Air Station Oceana. The squadron flies the Boeing F/A-18E Super Hornet and is currently assigned to Carrier Air Wing Seven.