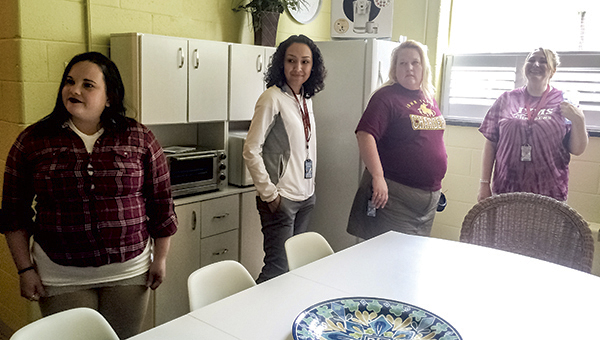 John Yeates Middle School teachers admire the new teachers’ lounge at their school. A local developer donated a remodel of the lounge when approached by a member of the Parent Teacher Student Association.

Teachers at John Yeates Middle School used to dread going into the teachers’ lounge. A renovation effort has changed that completely.

The Terry-Peterson Companies transformed the outdated, dingy teachers’ lounge into a bright, cheerful, practical space at no cost to the school.

“It’s unbelievable,” said Laurie Curtis, who has taught music at John Yeates for 10 years. “We have our own little paradise.”

The renovation, the brainchild of Parent Teacher Student Association President Courtney Wolfe, was revealed to teachers on Wednesday.

The room had sported a sign reading “closed for maintenance” while it was being renovated. Principal Dan O’Leary said he tried to keep the new amenities a surprise for his teachers.

Teachers gathered in the lounge after the noon unveiling, remarking on the new furniture, paint and decorations. Faculty cheered as the new coffee maker and toaster oven were revealed.

Wolfe said she came up with the idea last year, when she heard teachers remarking about the state of the room.

“Teachers wouldn’t even walk into the teachers’ lounge,” she said.

The former lounge was drab and cluttered, with moldy ceiling tiles, a broken air conditioner in the window and old furniture, Curtis said.

O’Leary agreed the lounge was in bad condition.

However, despite the poor state of the lounge, O’Leary said there had been no plans for the school to fix it.

“If we’re going to do anything, we’ll always take care of the kids’ areas first,” he said. “That pushes all the other projects to the back.”

However, Wolfe knew the lounge needed redecorating. After getting permission from O’Leary, she set out to find a business willing to help fix up the room.

Terry-Peterson’s Senior Vice President of Development John Peterson III agreed to renovate the lounge at no cost to the school or the PTSA.

“We’re a part of the community here in North Suffolk,” Peterson said, “and it felt like the right place to give back.”

The Terry-Peterson group paid for the cost of the renovation, planned the new design, and moved everything into the lounge.

Faye Markert, the president and owner of House Details, whom Terry-Peterson hired to redecorate the lounge, said the design was meant to make the room brighter and more inviting.

“We wanted to make it more inviting,” Market said. “It will be a place they want to be in.”

“Teachers deserve a nice place to rest and relax,” Peterson said. “We did everything we could to make it feel like a whole new place.”

The teachers joked that they would have to fight for the opportunity to eat lunch in the new lounge. O’Leary watched, smiling.

“It is absolutely amazing,” he said.