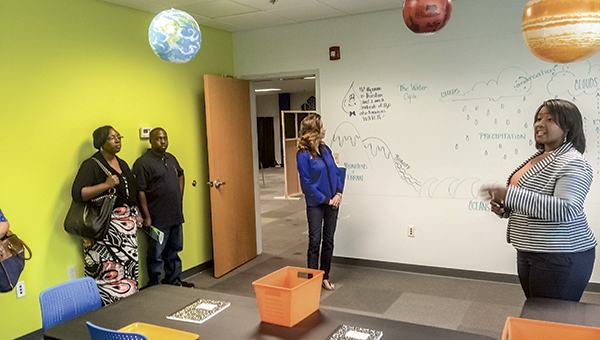 Star Pointe Academy, a private Christian school that aims to be innovative and tech savvy, will begin its first academic courses this July.

Brena Daniels, the principal and founder, says the school will have an atypical approach to learning.

“We felt like parents wanted a school that didn’t look traditional or teach traditionally,” Daniels said.

Taking a step into the building, it becomes evident that the school is anything but traditional.

“We want to redesign how school is done in Hampton Roads,” Daniels said.

In a presentation to prospective parents on Tuesday, Daniels described the variety of subjects the students will learn.

Daniels said students would learn math, science and English, but that all three would be taught with an emphasis on experiential learning. She said students will also learn about economics and entrepreneurship, as well as Spanish and Mandarin Chinese.

“We want to get students to a higher level that’s career focused and innovative,” Daniels said.

Over the summer, the school offers a program called Venture Quest, a series of weeklong classes. Subjects include video game design, forensic science and improvisational comedy. Each course costs $175 per week.

The courses were originally scheduled to begin on June 21 but have been postponed until July 5 while the finishing touches are put on the building.

So far, about 30 students have signed up for Venture Quest this summer, Daniels said.

At the center of the academy’s education is Christianity.

“I felt the divine calling that there were children out there that weren’t being listened to,” Daniels said.

Daniels then asked various students what they wanted in a school.

“We asked, ‘If you could design the school of your dreams, what would it be?’” she said.

Daniels said the school has done away with standardized testing and instead offers class schedules tailored to the individual students.

Parents Daniel Green and Lavone Whitener-Green toured Star Pointe during an open house and said they were impressed with Daniels’ ideas.

Green agreed that the school was tailored for pupils.

“I like that it’s student focused and not system focused,” Green said.

Daniels said more than 40 parents have turned in deposits for their students to attend the school.

Since Star Pointe is only beginning this year, it is not yet accredited. Daniels said accreditation is one part of a process to improve the school over the next few years.

Daniels said the school will add one grade level each year and plans to move the high school into a new building in 2018.

For now, the focus remains squarely on the year ahead.