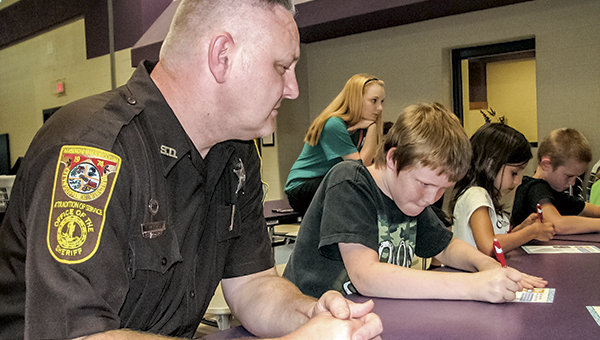 Suffolk Sheriff’s Deputy Mike Ambrose watches as students, including Julian Lindblad, sign a pledge to be safe around pools this summer.

Thousands of children in Suffolk are soon to be freed from the responsibilities of school for the summer and are likely to be spending plenty of time at the pool.

Thanks to the Suffolk Sheriff’s Office and the Suffolk Family YMCA, many of them have been educated about pool safety in recent weeks through a federally funded program.

“It’s something that is so dear to us, because there’s water all around us,” said Stella Germ, site director for the YMCA’s before- and after-school program at Pioneer Elementary School. “Water safety is close to my heart. My kids learned to swim early.”

At Pioneer this Tuesday, Deputies Debbie Callis and Mike Ambrose arrived after school and taught nearly two dozen children in the after-school program about pool safety. The children learned how to tell the difference between safe and unsafe drain covers and learned that they shouldn’t get in a pool or spa with an unsafe drain cover. They also signed a pledge to be safe around the water.

Maj. E.C. Harris of the Suffolk Sheriff’s Office said the office approached the YMCA about partnering on the program.

“It seems like every summer you see the tragedies around swimming pools and hot tubs and, really, large bodies of water with kids,” Harris said. “If you put it in the parents’ minds and the kids’ minds to be a little more careful, I think it can make a difference.”

Harris said more than 400 children have been through the program so far this year, including at Creekside, Driver, Nansemond Parkway, Mack Benn Jr., Hillpoint and Kilby Shores elementary schools and at the YMCA itself. He expects to do more of the educational programs this summer with children participating in Suffolk Parks and Recreation programs.

“I’m hoping we get to a thousand,” Harris said.

Germ said the YMCA gave a voucher for swim lessons to every parent with a child in their before- and after-school program.

“That is amazing to have that amount of kids that were made aware,” she said.

Even strong swimmers in recreational pools can fall victim to the dangers of the water. The law that founded the PoolSafely program, the Virginia Graeme Baker Pool & Spa Safety Act, is named after a 7-year-old girl who was a member of her community’s swim and dive team. She died in June 2002 after becoming stuck on the drain of a hot tub.

Virginia was the granddaughter of Secretary of State James Baker, and the law named after her requires a domed drain cover rather than a flat one or no drain cover at all. A domed drain cover makes it more difficult for a swimmer’s hair, fingers or entire parts of their body, such as their back, to be sucked against the drain and trap the swimmer underwater.