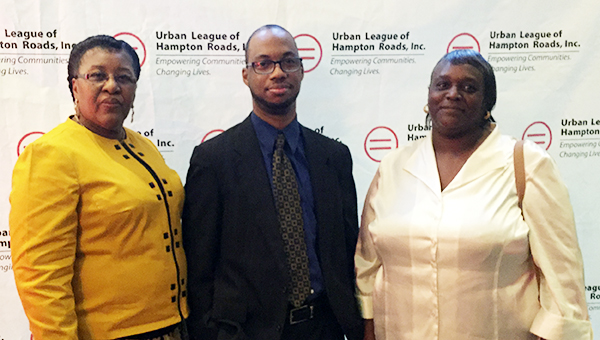 Massimo Zanetti Beverage USA received the 26th annual 2016 Whitney M. Young, Jr. Award, given by the Urban League of Hampton Roads in May. Attending on behalf of the company were, from left, Sharon Waters, production scheduler; Donte Boone, processing supervisor; and Monica White, warehouse clerk. Boone was recently promoted to his new position, having started at Massimo Zanetti as a contracted employee and working his way up to processing supervisor. (Submitted Photo)

The company received the program’s namesake Whitney M. Young Award for “… achieving significant progress towards diversifying its workforce at the management and non-management levels.”

Massimo Zanetti employs more than 600 employees in two facilities in Hampton Roads and one location each in New Jersey and Hawaii.

The Urban League particularly cited the company’s MZB Way Award, which is given during an annual employee event and recognizes outstanding contributions made by employees to the company.

Of special note was the 2015 edition of MZB Way Award ceremony, which was held on Martin Luther King Day and celebrated Dr. King’s life and accomplishments. The evening included inspirational speeches and videos featuring Massimo Zanetti employees as they shared how King’s philosophy had impacted their personal lives and inspired their workplace performance.

“MZB-USA recognizes that building a diverse and inclusive workforce is a journey, not a destination,” Greg Currier, vice president of human resources, stated in a press release. “This prestigious award is a step along that journey. On behalf of all MZB-USA employees, I express our appreciation to the Urban League of Hampton Roads for its recognition of our company’s ongoing diversity efforts.”

Each year, Massimo Zanetti selects two employees to receive the MZB Way Award. The two recipients are nominated by their peers for exceptional work ethic and accomplishments related to the company’s goals.

“We consider ourselves to be a local business within the areas we operate and endeavor to be active in philanthropy, corporate citizenship and community involvement,” Currier stated.

With a state-of-the-art roasting facility and headquarters in Suffolk, Massimo Zanetti also has a foodservice center for excellence in Moonachie, N.J., a 3,100-acre estate in Hawaii and a main distribution center in Portsmouth.