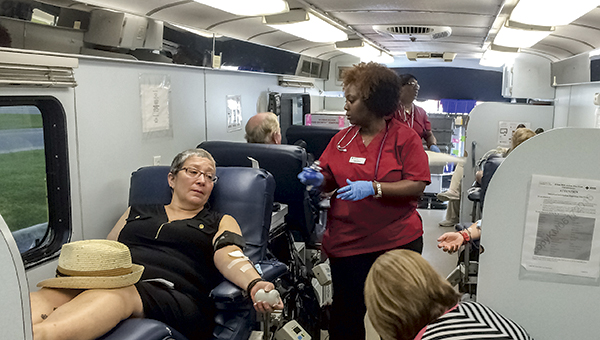 After Sunday’s mass shooting in Orlando, interest in donating blood has increased — even 10 hours away in Suffolk.

Mike Duman Auto Sales regularly hosts blood drives twice a year. In the wake of the shooting, Office Manager Bonnie Layton knew she needed to bring the blood drive to Suffolk as soon as possible.

“We wanted to make sure we got a blood drive in Suffolk because of the tragedy,” Layton said.

The blood drive was held in a mobile lab provided by the American Red Cross. Though quarters were cramped and the lab looked more like a school bus than a doctor’s office, people still lined up to give blood.

Layton said the increase in participants was most likely due to the attack.

“Yes, we were definitely expecting a higher turnout because of the shooting,” she said.

In Orlando, people stood in line for hours to donate blood after calls for increased donations to help the 53 people injured in the shooting on Sunday in the Pulse nightclub. The shooting killed 49 people, and many of the injured remain in the hospital.

Though the line on Friday in Suffolk was not nearly that long, the blood drive at the car dealership was backed up due to an increased number of donors.

“It’s not overwhelming,” said Kim Morris, the supervisor of the blood drive, “but donations have been more common” since the attack.

Luckily, Morris said, they were able to deal with the increased number of donors.

“We brought our A-team with us,” she said.

Many of those who donated cited Orlando as a motivation for giving blood. Pam Holland, a frequent blood donor, agreed that the tragedy added more motivation.

“I’ve always tried to donate, but I was a little more motivated because of the tragedy,” Holland said.

Joanna Bickham said she was also partially motivated because of the shooting.

“That’s definitely part of it,” she said. “The other part of it is my brother, who needed blood transfusions.”

Though many were there partially because of the Orlando shooting, others donated simply to help others.

Chase Townsend signed up to give blood for the first time. Townsend cracked jokes to the staff while hooked up to the machine with a needle in his arm.

“I think I just set a record,” Townsend said after he finished giving blood. “Fastest bleeder in Suffolk.”

Despite coming out of the donation feeling light-headed, Townsend said the experience was worth it.

“I got a little more than I bargained for,” he said, “but I know it’s all for a good cause.”

Mike Marston coaches Abigail Bilby on the sideline during a game. Marston started out coaching his daughter — and other... read more