The University of Cambridge on April 23 conferred the degree of Master of Education, with an emphasis on educational leadership and school improvement, upon Robert Scott Harry at the Congregation held in Senate House in Cambridgeshire, England. 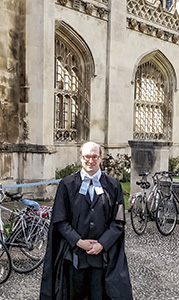 Harry is a native of Suffolk and the son of Tom and Carol Harry.

He attended Nansemond-Suffolk Academy and earned his Bachelor of Arts in English language and literature from the University of Virginia.