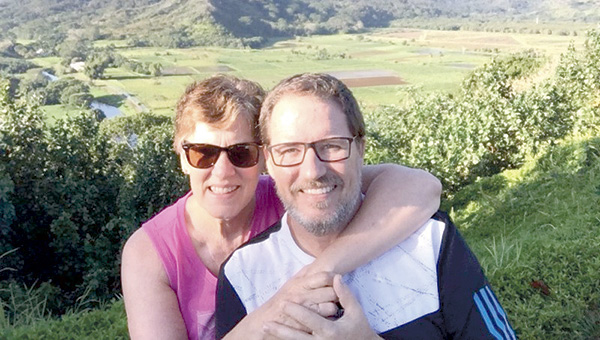 Terry Ryan embraces her husband, the Rev. Greg Ryan, before he fell ill with acute myeloid leukemia during a Hawaiian vacation. Ryan is currently undergoing treatment for leukemia at Duke University Hospital, and the community is rallying to repay his family for expenses related to his transportation from Hawaii to Duke.

The Chuckatuck community continues to pour out its support for the family of a local pastor facing huge bills following a medical emergency in Hawaii.

The Rev. Greg Ryan, pastor of Oakland United Christian Church, was flown across the country for treatment for acute myeloid leukemia, leaving his family with a nearly $100,000 transport bill. Since then, the community has banded together to help the family and the church.

Bethel Masonic Lodge No. Seven will host a fish fry at 10 a.m. Saturday to raise funds to help the pastor.

“We wanted to spread our love and offset some of the cost,” said Roosevelt Jones, sextant at Oakland and a member of the lodge. “I am sure he would’ve done the same thing for us.”

“It’s such an honor that the community would do this,” said Pam Saunders, chairman of the board of deacons at Oakland.

Ryan was diagnosed with acute myeloid leukemia, a type of blood cancer, while celebrating his anniversary in Kauai, Hawaii. He visited urgent care after experiencing chest pains and difficulty breathing. After being taken to a Hawaiian hospital for more testing, he was diagnosed with leukemia.

After being hospitalized in Honolulu, Ryan was flown to Duke University Hospital for treatment. His health insurance did not cover the airlift, leaving his family to foot the bill.

Saunders said the church held an all-day prayer vigil for Ryan, and ministers in Honolulu visited him in the hospital there.

“The support has been overwhelming,” Saunders said.

Driving through Chuckatuck, one can see signs advertising the fundraiser at various businesses and organizations. Saunders said the community has reacted this way because of Ryan’s outreach.

“Greg is a man of great faith and a true believer in community relations,” Saunders said.

During his two years at Oakland, Ryan has been a constant face in the community, visiting local churches and trying to unite the area, Jones said. Ryan organized Oakland’s “Fourth Friday” events, which offer free dinner to attendees, and he got the church involved in the Coalition Against Poverty in Suffolk.

“The community has really come to love him,” Jones said.

Even though Ryan is in the hospital, Oakland is still trying to serve their mission as a church, Saunders said. “We’re in a state of crisis, but we’re going forward with the work of the church. That’s our way to help Greg the best we can at this time.”

The Rev. Wayne Gardner is serving as Oakland’s interim minister while Ryan is in the hospital.

Ryan is hospitalized in the intensive care unit at Duke University Hospital. He is recovering after undergoing seven rounds of chemotherapy.

Saunders said Ryan is still unable to breathe without a respirator, though he is beginning to engage in some physical therapy.

Saunders said there will be other fundraisers for Ryan this year, including one run by the local Girl Scouts troop in July, as well as one run by the church in the fall.

Jones said he expects a large turnout at the event.

“Rev. Ryan has done more for the community than anyone,” he said.

Woman charged with hit and run

A Newport News woman is charged with three counts of hit and run following an incident that occurred on June... read more