A big wind in Crittenden 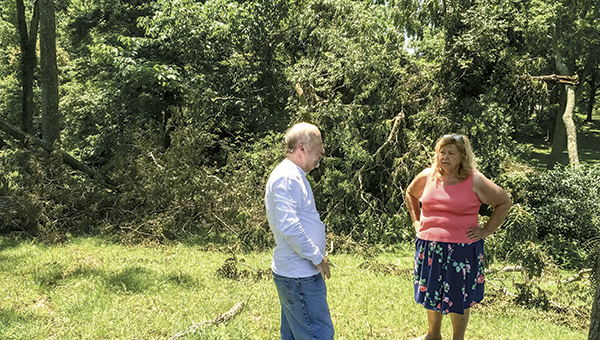 Ann Parker and Gordon Hatchell discuss the windstorm in Crittenden while standing in front of the trees it brought down.

A windstorm struck a neighborhood in Crittenden on Thursday night, toppling trees and littering the ground with branches.

Though the National Weather Service now says otherwise, residents thought at the time that they were experiencing a tornado.

The storm blew through a riverside community off Crittenden Road at about midnight Thursday. Ann Parker, a longtime Suffolk resident, said she was downstairs in her kitchen when it hit.

“The glass cabinets and the china cabinets all flew open, and it blew everything off the table,” Parker said. The wind sucked the screens out of her upstairs windows and blew them out into the marsh behind her house, she said.

Gordon Hatchell, who lives across the street from Parker, said he heard a roar that sounded like a train going by.

“It was close to midnight, and, all of the sudden, it felt like the whole house shook,” Hatchell said.

Both Hatchell and Parker said they thought what they experienced was a tornado.

“It was definitely something,” Hatchell said, “but I’m pretty sure it was a small twister.”

Tim Gingrich, a journeyman forecaster at the National Weather Service in Wakefield, said the organization had no reports of a tornado in the area.

“We looked at the radar from that day and found no rotation in that area, so it was probably straight-line winds,” he said.

The next morning, people looked outside and saw tree branches strewn all over their lawns and the road. Large trees were downed, but, fortunately, none did any damage to the houses.

“You couldn’t walk next door for all the limbs,” Parker said. Hatchell agreed that the debris was extensive.

“There were branches all over the place,” he said. “We worked all day Saturday to clean it up.”

Nobody was injured, and there was no permanent property damage, Parker said, despite the extensive damage to the trees.

“We were very fortunate,” she said.

Parker would know about bouts of freak weather. She has lived in her house in Crittenden for more than 40 years. During her time in Suffolk, she has observed similar phenomena.

“We’ve had tornadoes here before,” Parker said. “There was one when I was young that plowed through the woods and into the river. The wind was so strong we couldn’t get the door closed.”

Parker knows firsthand the damage windstorms can do. Whether it was a tornado or just straight-line winds, one thing is for certain — it’s fortunate everybody was safe.

“It was just one of those freak things,” Parker said. “I’m just happy no one was hurt.”

Suffolk residents will have a chance on Thursday to give their input on the amenities and programs they would like... read more