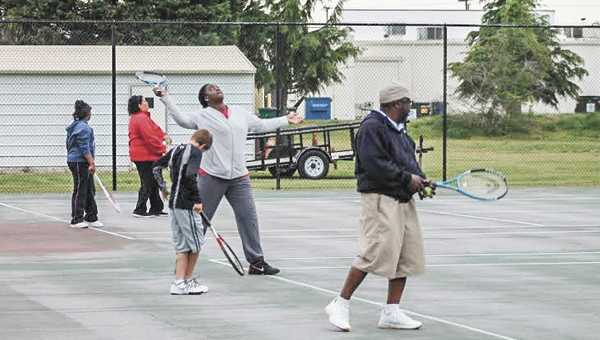 Participants in a tennis rally night polish their skills. Friday evenings are set aside for rally nights at the Howard Mast Tennis Complex behind the North Main Street Farm Fresh.

The Suffolk Parks and Recreation organization hosts “Friday Night is Rally Night” to help beginner and intermediate tennis players learn the sport and practice their skills.

Every Friday from 6 to 8 p.m. is Rally Night at the Howard Mast Tennis Complex. Janice Henderson is the coordinator of the rally nights and thinks it’s a good idea for those who are aspiring to learn the skill.

“The rally night is free to the public, and the purpose of that was for my students to get out and do what they are being taught,” said Henderson. “It’s just to re-emphasize what they have learned.”

The event started two years ago and attracts a wide variety of people every time.

Henderson said the crowds vary from week to week, but everyone gets time to play based on their abilities.

“They come to the Rally Night, and depending on their skill level, I set them up with players,” said Henderson. “They play for an hour and a half to two hours depending on the player and the match.”

Henderson teaches classes Monday through Thursday, and the prices are $20 for children and $23 for adults. In the beginners’ class, players are taught match play and understanding the dynamics of the court.

“They are just taught the basic things you need to know to play a match,” said Henderson.

Rally nights helps to reinforce her students’ training, as well as give those learning on their own an opportunity to get some playing time in. Henderson realized that people needed to be around tennis to get better, and that’s why she organized the event.

“I saw the need, because after you teach people to play you would want them to do something with what they’ve been taught,” said Henderson. “I had players that wanted more, asking me ‘Where do we go from here?’”

Rally night is also a way for those who want to learn how to play tennis to get some experience and sign up for classes if they want to get better.

“If needed, I can refer them to other activities such as league play and tournament play,” said Henderson. “There’s all types of avenues when you’re a tennis player.”

Rally nights will happen from 6 to 8 p.m. every Friday night through Nov. 6.

People interested must call ahead at 514-7243 to reserve a court.