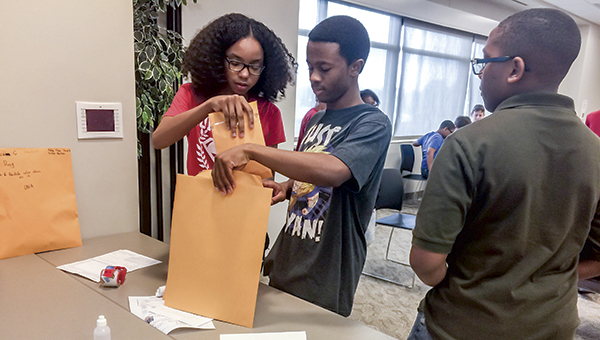 Aniyah Parker, Lamar Jones and Lashawn Scott put evidence from their mock crime scene into an envelope so it can be analyzed. Their group dusted for fingerprints and used DNA analysis to solve their case.

Evidence for five violent crimes is spread out on the table. Investigators crowd around, hoping to solve the cases.

Fortunately, the crimes aren’t real. Instead, they are mock crime scenes set up for the Suffolk Commonwealth’s Attorney’s Fifth Forensics Camp.

Campers spent a week interacting with real forensic investigators, learning how police use forensic tools to solve crimes, and eventually got to solve their own cases. 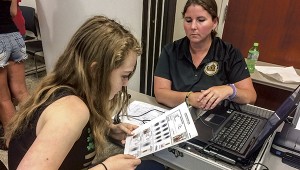 Suffolk Sheriff’s Deputy Debbie Callis creates an identification card for Layne Pace using Layne’s picture and fingerprints during the Suffolk Commonwealth’s Attorney’s forensics camp this week. Callis has worked with the forensics camp since it began in 2012.

“This experience has educated them enough to have an interest in becoming attorneys, law enforcement, or even forensic investigators,” said Joan Turner, the community outreach coordinator for the Commonwealth’s Attorney’s office.

The campers learned about forensic tools like fingerprint and DNA analysis over the course of the week. The children were divided into five teams, where they had to use their new knowledge to investigate crime scenarios that Turner set up.

Each crime scene had its own evidence that the teams had to evaluate in order to find the culprit. Each group had help from a forensic investigator to better analyze the crime scene.

“We help them figure out what goes where and see what they want to do with the evidence,” said Katrina Everett, an investigator with the Isle of Wight Sheriff’s Office. “Right now we’re working on a residential burglary.”

The children said they enjoyed working with the officers.

The groups spent Thursday working with their investigative partners. One group looked on in fascination as Bert Nurney, an Isle of Wight forensic investigator, demonstrated the various materials he keeps in his car to deal with forensic cases.

The five groups will present their new knowledge and their crime scenes at the camp’s graduation Friday morning. Each group will show parents what they did during the camp and how they used the evidence to solve their cases.

The camp was started five years ago and has become a huge success over the years. This year’s crew featured 58 students, the most since the camp’s beginning.

Joan Turner, who worked in the Suffolk Police Department for 17 years, proposed the idea for the camp when she came to work for Phil Ferguson, the commonwealth’s attorney.

“I just felt we could bring something to the community and the kids that would educate them about what really happens in law enforcement,” Turner said.

The free camp is offered for ages 12-15. High school students 16 and older work as assistants for the camp. The assistants will receive letters from Ferguson crediting them with 20 community service hours, which will go toward their graduation requirement.

Two assistants, twins Lamar and Lamont Jones, have attended the camp each year since it began.

“We wanted to try out each crime scene,” Lamar said.

The two came back as assistants this year in order to share their knowledge.

“We thought it would be a good opportunity to teach others,” Lamont said.

The kids who participated seemed to agree that the camp was a success.

“It was so great to learn from experts,” said Kaleb Hoesly, 12. “I though it was really cool to see how they solved in-depth cases.”

Turner said her goal for the camp was to make education entertaining for the kids.

“We wanted it to be educational and fun at the same time,” she said. “Kids are learning how to use science in an interesting way.”