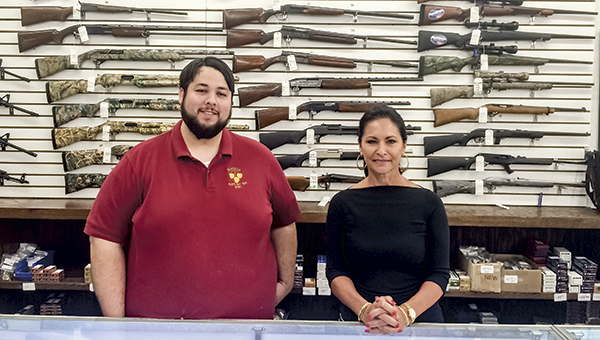 Eric Symborski, assistant manager, and Joanna Erwin, owner of Suffolk Pawn and Gun, show off a selection of firearms available in their shop. Symborski is skeptical about a bill that would deny firearms to those on the terrorist watch list, saying that some people on the list don’t deserve to be there.

One bill under consideration in Congress would prevent people on a terrorist watch list from purchasing firearms.

“I absolutely support it,” said Thomas Erwin of Precision Pawn, a licensed gun vendor. “I think we should do whatever we can to keep guns out of the hands of terrorists.”

Groups as varied as the National Rifle Association and the American Civil Liberties Union have expressed discontent at the proposed legislation.

Eric Symborski, assistant manager at Suffolk Pawn and Gun, was skeptical toward the bill.

“If the list was 100 percent fact, I would support it,” he said. “Instead, some people are put on the list that don’t deserve to be there. People will lose their rights that didn’t do anything wrong.”

Symborski was critical of the conditions that could place someone on a terrorism watch list. The ACLU, one of the bill’s critics, said the ambiguous language would allow the government to take away the right to bear arms without due process.

Democratic congressmen also sought votes on legislation to expand background checks for those purchasing firearms. All licensed gun vendors in Virginia are required to have background checks done by the state police on any potential buyers.

“Virginia law requires us to do background checks for every purchase,” said Bruce Wayne, manager at Exclusive Pawn and Guns. “We always do our due diligence before selling any weapon.”

Though gun shops like Exclusive Pawn and Guns must do background checks, private sales by unlicensed vendors have no such requirement. Legislation has been repeatedly proposed to force background checks for all gun sales, though it has not passed.

Erwin said he was in favor of closing the so-called “gun show loophole.”

“I think it would protect us,” he said. “We don’t want guns in the hands of criminals.”

Symborski and Wayne were more skeptical of the idea, believing it could increase black-market gun sales.

Joanna Erwin, the owner of Suffolk Pawn and Gun, said illegal purchasing was her biggest fear with increased gun control.

“They’ll have guns being bought out in parking lots,” she said. “More business will go to the black market.”

Though the gun shop employees expressed differing opinions, they agreed that legislators should know more about firearms before any new legislation is proposed.

“There’s a lot of vague language because they don’t have knowledge about firearms,” Symborski said. “Proposing laws without doing research makes them seem like they don’t know what they’re talking about.”