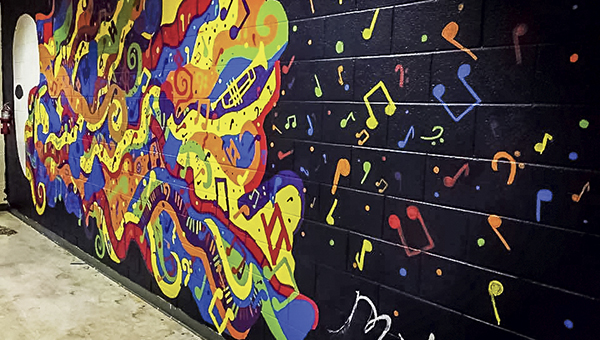 The new mural at Nansemond River High School is an explosion of colorful musical notes on a black background. (Submitted Photo)

Senior Maia Micou and other members of Joleen Neighbours’ theater class designed a mural to commemorate the school’s arts program.

“It was something I wanted to do for years, but I wanted a student to do it,” said Neighbours, chair of fine arts at Nansemond River. “Maia was the right student for the project.” 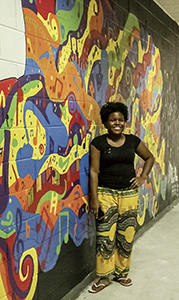 Micou said Neighbours approached her with the idea to make a mural at the beginning of the school year. Because of the hectic nature of her senior year, Micou saved the project until the end of the year, when she and other drama students could paint after school.

Micou said she gave Neighbours three designs for the mural. The one they settled on is an explosion of bright colors framed on a black background. The mural features musical notes as well as an opera mask.

“I wanted to put all the performing arts together,” Micou said. “I wanted it to feel lively and vibrant.”

Neighbours said the mural is a perfect representation of what the fine arts department is all about.

“I think it’s a wonderful statement about how the arts make well-rounded students,” Neighbours said.

The mural, which was completed on June 17, was the result of lots of work from the students. Micou and other drama students met after school for about two weeks to complete the job.

This is not the first time Neighbours and Micou united to create art. Micou had designed costumes for Neighbours’ theater class since her sophomore year. Neighbours said she was impressed with Micou’s talent as an artist and a designer.

“She’s got a very bright future and career ahead of her,” Neighbours said.

Micou will be attending Virginia Commonwealth University in the fall to study fashion design.

Neighbours said the mural is one of many projects that will be part of Micou’s impressive portfolio and called it one of her students’ best accomplishments.

Micou said she was happy to be able to express herself with the mural.

The fine arts hallway at Nansemond River now has artistic décor to go along with the art created in the rooms.

“People said it was amazing,” Micou said. “It makes a completely different aura in the hallway.”