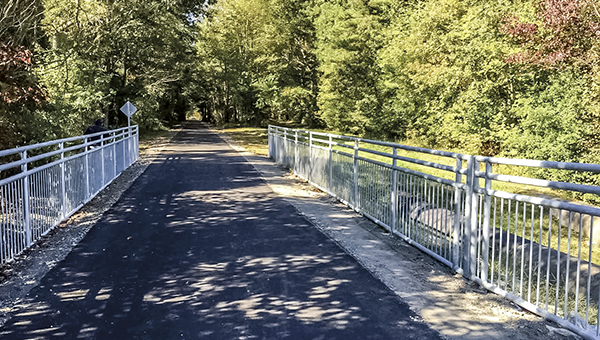 Two Suffolk public works projects and the employees who guided them were recognized by the American Public Works Association Mid-Atlantic Chapter at its annual conference May 5 in Roanoke.

Sandon Rogers, a civil engineer with the Public Works Department, and Helen Gabriel, assistant director of Suffolk Parks and Recreation, received the honors. 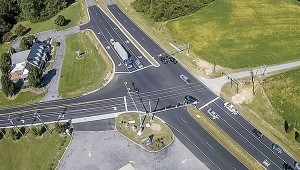 The intersection of Bridge Road and Lee Farm Lane is seen from above, with new improvements that earned it the Project of the Year Award in the American Public Works Association Mid-Atlantic Chapter contest. (City of Suffolk Photo)

Rogers received the Project of the Year Award for the Transportation Less than $5 Million category for the Bridge Road and Bennetts Pasture/Bridge Road and Lee Farm Lane intersection improvements projects.

The Bridge Road and Bennetts Pasture Road/Bridge Road and Lee Farm Lane Intersection Improvements project provided intersection improvements to address safety and congestion. After the design plans, the associated utility relocations, and the right of way acquisition were completed, construction of the intersections began in early 2015 and, upon completion, the new signals were activated in October of 2015.

The new signals afforded the opportunity to link these final two intersections through the city’s interconnect system with the other traffic signals along the Bridge Road corridor, resulting in increased efficiency of traffic flows and a decrease in overall signal delays. The increased efficiency of traffic flow reduces vehicle deceleration, idling, and acceleration resulting in an overall reduction of engine emissions. The project was completed under budget.

The Seaboard Coastline Trail is an 11-mile multimodal trail planned along the abandoned Seaboard Coastline rail corridor. The trail extends from downtown Suffolk in a northeasterly direction to the Suffolk/Chesapeake city line. Ultimately, the trail will be part of a planned multi-city, 41-mile long South Hampton Roads Trail that will link the cities of Suffolk, Chesapeake, Portsmouth, Norfolk and Virginia Beach. The regional trail is supported not only by the local cities and advocacy groups but also by regional organizations such as the Hampton Roads Planning District Commission. The South Hampton Roads Trail is a critical component in the city’s commitment for a healthy community.

This project, which is the first phase to be constructed, represents Segment IV of the

The architecture and engineering firm Clark-Nexsen provided design services on both projects and was responsible for putting the award submission applications together.