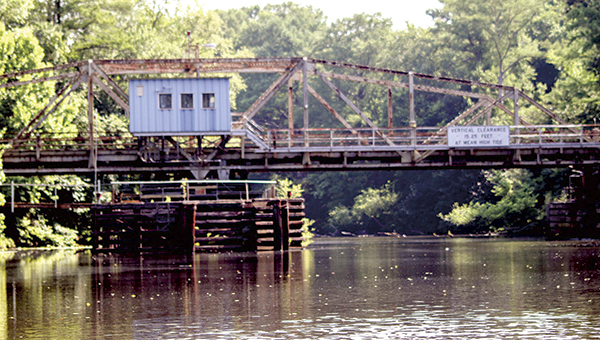 The Virginia Department of Transportation is considering replacing the South Quay Bridge with a newer version.

As it proceeds with an environmental impact study, the Virginia Department of Transportation on Monday evening requested comment from the Southampton County Board of Supervisors regarding the possible replacement of the 76-year-old swing-span bridge over the Blackwater River on South Quay Road.

The existing bridge, which has not been opened in more than 15 years due to the absence of large-vessel traffic, has a vertical clearance of only 14 feet. New regulations implemented by the United States Coast Guard would allow for it to be rebuilt in a higher, fixed position for safe passage of such vessels, if needed, as they no longer require 24-hour advance notice of transit.

The proposed sequence of construction would be to close the roadway and detour traffic; demolish and remove the existing structure; and then construct a new bridge on the same alignment. Suffolk-bound traffic would be detoured down Pretlow Road to Southampton Parkway, but supervisor Bruce Phillips wondered how those with farm equipment would bypass the construction.

“We have allowed some farmers to use Route 58, but it’s a simple process of applying for a permit,” said VDOT Franklin Residence Assistant Administrator Jerry Kee. “There’s two farmers right now that have permits in place, because their equipment [is too wide to] go across the bridge.”

The new bridge would have 12-foot travel lanes and 10-foot shoulders to account for such traffic. However, no public hearings or timetables for construction have been set.

“There is no project schedule at this point [because] they’re still in the very preliminary stages of planning this project,” Southampton County Administrator Mike Johnson said.

From Windsor to the Joffrey

Cheyenne Freeman of Windsor has been tying up her ballet slippers and leaping onto stages across the nation for more... read more