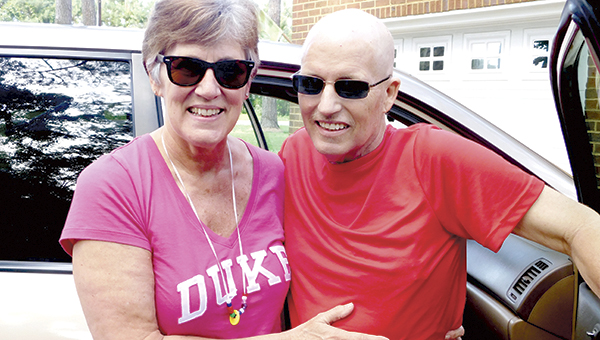 Terry and Greg Ryan arrive home after a trip from Duke University Hospital on Tuesday. Greg Ryan, pastor at Oakland Christian United Church of Christ, fell ill while on vacation in Hawaii and has been diagnosed with leukemia.

The Chuckatuck community was celebrating on Tuesday as the Rev. Greg Ryan, pastor of Oakland Christian United Church of Christ, returned home.

“We are so excited to have him back,” said Pam Saunders, chairman of the board of deacons at Oakland.

Ryan, who has been in intensive care at the Duke University Hospital for the last seven weeks, was diagnosed with acute myeloid leukemia.

“He was on death’s door,” said, Terry Ryan, the pastor’s wife.

In late May, the couple flew out to Kauai, Hawaii, for vacation. During the first week, Ryan was experiencing chest pains and breathing complications.

He eventually was admitted into a local hospital for testing. He was then transferred to a larger facility in Honolulu, where he received his diagnosis. During that time, Ryan fell into a coma and was placed on a ventilator.

On May 24, the day of the couple’s 18th anniversary, Ryan’s family decided to have him flown to Duke University Hospital for additional treatment and to be closer to home. The airlift cost more than $95,000, which Ryan’s insurance did not cover.

Fortunately, Ryan’s immediate family was able to raise the money to cover the cost. Ryan’s aunt, Marla Talmadge, also started a GoFundMe page to help reimburse the family members. To date, the page has raised more than $40,000.

In addition, Oakland and other local churches and organizations have hosted their own fundraisers to help with the remaining airlift costs.

“The [support] has been outrageous and amazing,” Ryan said.

Through the course of his hospital stay, Ryan was visited by family members, loved ones and several local United Church of Christ pastors who provided words of encouragement and prayers.

In Ryan’s absence, the Rev. Wayne Gardner has served as the interim pastor.

“He has been a total godsend during this tough time for the church,” Saunders said.

After about a week at the Duke University Hospital, Ryan woke up from his coma and began his chemotherapy treatment.

Despite several rounds of chemotherapy and losing more than 35 pounds, Ryan’s faith has been important to his recovery, he said.

“I have been doing a lot of praying and meditating on the miracles God has been working into my life,” Ryan said.

It is a great relief to see him on the mend again, his wife said.

Also, once a month, for a period of five days, Ryan will have to return to Duke to perform consolidated chemotherapy. This is necessary to make sure there are no traces of leukemia remaining in his system.

Ryan understands there is a long road to recovery ahead, but he is optimistic.

“The first few weeks were heartbreaking — here I am at 53 years old with leukemia,” said Ryan. “But now I realize, I am a grandfather, I am a stepdad, I am a golfer, I am a marathon runner and I have leukemia. I am a lot of different things that define who I am.”

The Chuckatuck Girl Scout troop will host a spaghetti dinner fundraiser for Ryan on July 31. Oakland will also host its own fundraiser on Sept. 11 at the Chuckatuck fire station.