The Western Tidewater Health District once again has a permanent director more than six years after an acting director was appointed.

Dr. Christopher Wilson took over on June 10 from Dr. Nancy Welch, who has split her time between the Western Tidewater and Chesapeake districts since 2010. 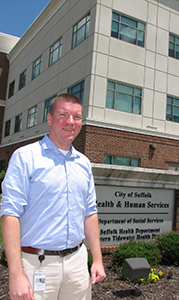 Dr. Christopher Wilson is the new director of the Western Tidewater Health District. He is the first permanent person in the position in more than six years.

Wilson has spent the last eight years in the U.S. Army after graduating from Eastern Virginia Medical School. He grew up in Richmond and attended Lynchburg College for his undergraduate degree.

“I am slowly getting to know the folks in the office and getting out in the community and meeting folks we work with,” Wilson said last week.

He said he has been interested in health for many years but has always enjoyed looking at the bigger picture, which makes public health perfect for him.

Wilson did a four-year residency in Washington state while in the Army. After that, he spent four years in Fort Jackson, S.C., as the public health director for the installation. That four-year period also included a six-month tour in Afghanistan.

“It was a fascinating place to see how life and health interact,” Wilson said of Fort Jackson, which conducts basic training for Army recruits. “(The Army has) really strong preventive medicine programs, because it’s so important for the Army to keep soldiers healthy so they can complete their missions.”

Wilson said public health is simple yet complex. Parts of it are about communicating basic information, such as stressing the importance of hand-washing in restaurants or of dumping buckets and old tires where disease-carrying mosquitoes can breed.

“Communicating the simple messages is one of the biggest things that you can do to make a difference,” he said. “Little things like that make all the difference in the world.”

But there are public health issues with multi-faceted causes and solutions, such as access to care, diabetes, obesity, lack of physical activity, tobacco use, teen pregnancy and sexually transmitted diseases.

“For Suffolk and Western Tidewater, diabetes is a key place we need to do some work,” Wilson said.

He hopes to work on improving physical activity and nutrition among the population, as well as access to care.

“I think that can make a difference, certainly, in the long term,” he said.

Wilson manages around 80 employees providing a wide variety of services to the community, including immunizations, family planning services, maternity clinics, nutritionists and nurses, and the Women, Infants and Children program.

Environmental health, such as sewage, wells, restaurant inspections, rabies and more, is also a focus of the health department, as well as emergency planning and epidemiology.

“I’m excited to be here and looking forward to the many challenges that come with the position,” Wilson said.

Wilson and his wife, Erika, and their children, Nina and Rowen, have made their home in Carrollton.

“It was important for me to live in the district,” he said. The Western Tidewater Health District serves Suffolk, Franklin, and Isle of Wight and Southampton counties, including the towns of Smithfield and Windsor.