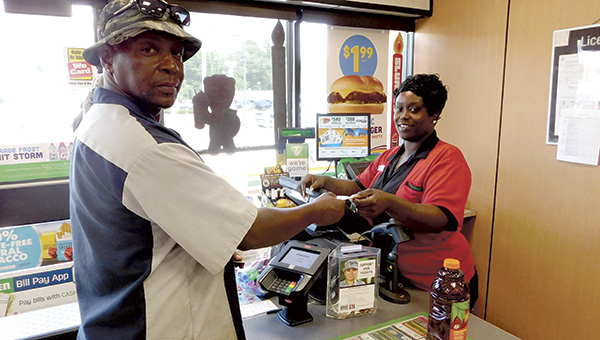 The door chime dings continually as customers file into the convenience store. The line of anxious customers is buzzing with conversation regarding the anticipated jackpot. There is a steady ring from the cash register resembling Las Vegas slot machines as customers exchange their dollars for handfuls of tickets.

The jackpot for Friday evening’s drawing, which was estimated Friday morning at $540 million, is the third largest Mega Millions jackpot and the seventh largest of all time, according to John Hagerty, a Virginia Lottery spokesperson.

There was a drawing on Tuesday, but nobody won the estimated jackpot of $504 million.

Several local retailers have sold hundreds of tickets so far.

However, Hagerty expects that most tickets would be sold on Friday, the day of the lottery drawing. He projected 3.75 million tickets to be sold statewide on Friday alone.

“The peak hours are expected to be between 5 and 7 p.m. [on Friday] as everyone is getting off work,” Hagerty said. “We expect to sell over 7,500 per minute.”

Hagerty said the expected surge in ticket sales on Friday might lead to another jackpot increase before the drawing.

In January of this year, two businesses on Holland Road both sold winning lottery tickets totaling to more than $3 million.

Richard Conner, owner of Roy and Ricky’s Catering, had purchased several New Year’s Raffle tickets leading up to the Jan. 1 end date. He was away on vacation when he got the news he had won the jackpot from his own store.

“I had forgot all about [the ticket], but my son called me and told me,” Conner said. “This was definitely life-changing and a breath of fresh air.”

To date, Conner has used the money to purchase new vehicles and equipment for his business.

Just down the road, Supreme-Holiday Food Store owner Jimmy Patel has sold two $2 million tickets since January. He jokingly said it is definitely possible that he will sell another winning ticket on Friday.

As expected, both businesses experienced spikes in traffic after the winnings.

“Several people thought this was a lucky spot,” Conner said.

Other local retailers have experienced up to a 10 percent increase in lottery ticket sales in the last few weeks.

Regardless of what option the winner goes with, Hagerty recommends financial assistance.

“You can’t go into this alone,” Hagerty said. “I recommend having a tax professional and financial advisor.”

Everyone has some lottery fantasy, and folks who were buying their Mega Millions tickets Thursday in advance of the big $540-million drawing today were no different. Here’s what a few Suffolkians say they’d do with such a big haul.

Suffolk will once again be able to use the free services of Western Tidewater Regional Jail inmates to cut grass... read more