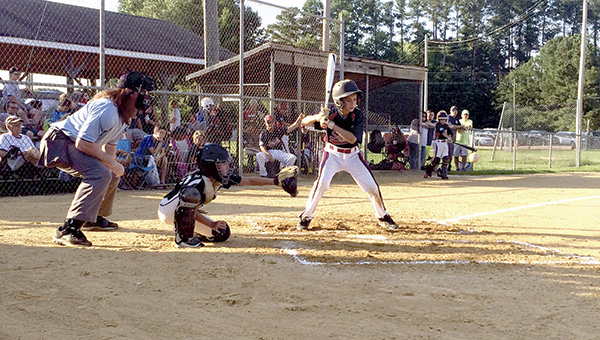 Above, an SYAA Bronco batter prepares for the pitch on Thursday evening. Below, a base runner gives a signal during a play.

SYAA is hosting district tournaments for the Mustang, Bronco and Pony divisions of Pony Baseball this week. Usually, each tournament is held separately, but the youth sports organization, Suffolk’s largest, made the leap to host all three simultaneously for the first time.

“We’ve never done it before,” SYAA baseball commissioner Jeff Beale said. “Pony needed a place to hold the tournaments, and they said we could do it.”

John Brinkley, the SYAA baseball and softball commissioner, said organization was originally slated to only host a district tournament for one of the divisions. However, he said, they decided to hold all three simultaneously because it was easier than finding separate venues.

“Nobody else had a facility large enough,” Brinkley said. “It takes a lot of volunteers to put a tournament together. It would take minimal volunteers to add and host two extra tournaments at SYAA.”

Despite the number of teams at the facility at any time, Beale said the different divisions are able to manage the limited space.

“Each age group has their own space,” he said. “Each field has a lot going on, but we manage to stay out of each other’s way.”

Beale, who coaches the SYAA Mustang team, said the tournament has been a good experience so far, despite his team not getting off to the best start. The team lost their first game, but followed it up with a solid victory against Western Branch.

“The goal is always to get the kids to the next level,” he said. “All coaches want to win, but we also want kids to reach their potential.”

Though the team lost their first game against Western Tidewater, there is still a chance for them to move into the top two spots and advance to sectionals.

The district tournaments are double-elimination brackets, meaning that it takes two losses for a team to be eliminated from the tournament.

Suffolk’s Pony division team, which includes players who are 13 and 14, also got off to a split start. They lost their first game but put up a convincing 8-3 victory in their second game. Coach James Moore said the tournament has been difficult, as they face off against older, more experienced teams.

“Some of the other teams — they have been playing high school ball,” he said. “Most of our team is 13-year-olds, so we have a young group of kids.”

Despite the age difference, Moore said his team has the talent to do well in the tournament and advance to sectionals. He said the key to helping the players execute is to set goals for each game.

“We want to get at least nine hits and no more than three strikeouts in our next game,” Moore said. “We know our goals and how to play well, we just have to execute.”

The third tournament division, Bronco, has also been the most successful for SYAA. The Bronco team, coached by Matt King, won both of its first two games, albeit by small margins. The first game was a long matchup against Deep Creek, which SYAA won 9-7. The second was a nervy game that ended 10-9.

“I was very nervous,” King said, “But the kids held their composure and stuck it out to the end.”

King’s team could be named district champions with a win in its Friday night game.

King said the team has played so well, because the kids get along well as a group.

“They have good chemistry on the field, but they also goof off well together,” he said.

The Suffolk teams all hope to take home silverware in their home tournament, but John Brinkley said the tournament will be a success even if they leave empty handed.

“I’m proud of the effort we’ve put together,” he said.

Wiesel ‘made his life count’

By Rev. Dr. Thurman R. Hayes Jr. It is often said, “Those who forget the past are condemned to repeat... read more