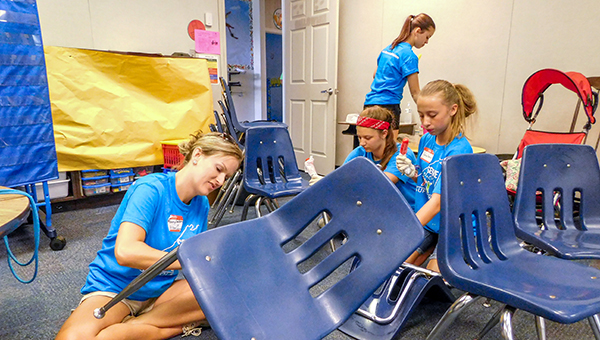 Volunteers from Southside Baptist Church and Open Door Church have conducted service projects around Suffolk, including at several public schools, and held Vacation Bible School for local children at a park this summer.

This year, Open Door Church decided to assist Southside with its project.

“This is like a mission trip at home,” said Jerry McLeod, senior associate pastor at Southside Baptist Church. 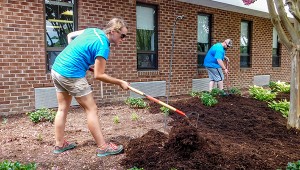 Volunteers from Southside Baptist Church and Open Door Church have conducted service projects around Suffolk, including at several public schools, and held Vacation Bible School for local children at a park this summer.

In years past, volunteers have served in many fashions. They have provided meals to the city’s fire and police departments, and they have conducted trash clean-ups in various local supermarket parking lots. They have also gone into neighborhoods and prayed with residents.

“The church is God’s love on display,” Effler said. “If we aren’t involved in the community, we aren’t displaying God’s love.”

Due to the requests from city school principals, the initiative has also incorporated serving local schools.

“Schools didn’t have enough money for repairs and renovations — so that’s where we stepped in to help,” Effler said.

More than 150 volunteers are involved in this year’s initiative — one of its largest groups to date. Despite this being Open Door’s first year helping out with the project, they have contributed a team of more than 70 volunteers.

The project has attracted the old and young, and collectively the group has been very effective.

“Watching people of all ages serving together is huge,” McLeod said. “This is Christ’s love in action.”

The two congregations have worked well together and plan to continue for the foreseeable future.

“It’s been awesome,” said Becky Dennys, a volunteer from Open Door Baptist Church. “It’s not about them or us, but the community.”

Several volunteers have posted photos of the group in action using the hashtag, #servesuffolk.

Every day this week, the group begins working at 8 a.m. and concludes by the afternoon. Afterwards, the younger volunteers gather at Planters Park for Vacation Bible School. They participate in recreational activities, arts and crafts and Bible lessons. This year’s Bible schools have attracted more than 80 children, which is double the amount of past years.

On Friday, the group will host a picnic at the park to celebrate its efforts over the course of the week.

Open Door plans to perform a similar service project in the King’s Fork area within the next two years. The church is using its current partnership with Southside as a “shadowing opportunity,” Dennys said.

In addition, both churches plan to implement mentoring programs for students during the upcoming school year.

For the future, volunteer Autumn Thompson, 16, hopes that more of the community will be involved with the initiative.

“I want all churches and organizations to come together to help the city of Suffolk,” Thompson said.

A teenager from Suffolk was sentenced Monday to 25 years in prison for a Portsmouth murder. Daquan Miller, 17, also... read more