Suffolk police are seeking the public’s help locating a woman who was reported missing Friday. 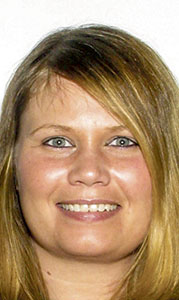 Candice Brine Miller, 34, is missing and considered endangered because she suffers from a medical condition, according to a city press release.

She was last seen at 3:30 p.m. June 21 at a friend’s house, wearing a red hoodie sweatshirt and dark pants.

She told a friend she was going to an unknown destination in Florida, according to the press release. However, the E-ZPass on her vehicle went through a toll location in West Virginia that same day.

She had packed a large amount of food items in her vehicle, a black, two-door, 2008 Honda Civic, before departing. It has Virginia tags WSV-4977.

There has been no contact with Miller since she was reported missing. Miller is 5 feet, 5 inches tall and weighs 135 pounds, with blonde hair and green eyes.

Call 911 or your local police department if you see Miller or know of her whereabouts.