Local teen Davik LeVrai Brendan Ross has been missing for more than a week now, and his family is reaching out to the public for assistance. 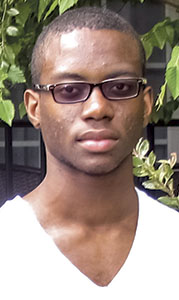 Ross was reported missing July 6 after last being seen about 9:40 p.m. the day prior, according to a police press release. He was leaving his house in the 1000 block of Silver Charm Circle, where he lives with his mother, Dawne Ross.

“He’s really a nice young man,” Ross said. “But he doesn’t make friends easily. He was always kind of quiet.”

Ross graduated from Nansemond River High School in June and enjoyed video games, writing stories and working out, Agbasi said. He has three siblings. He was eager to find a job and explore furthering his education, Agbasi said.

But instead, Ross is now missing, and nobody in the family has heard from him.

“It is not like him to go this long without contact with the family or returning home,” Agbasi said in a statement emailed to the Suffolk News-Herald. “This is unusual behavior for him. We are worried about Davik’s health and safety.”

Dawne Ross said her son hadn’t come to terms with his mental condition and had stopped taking medication.

“It’s been tough to get him settled on medication,” she said.

Agbasi said he and others in the family live in Canada.

“There’s only so much we can do from here,” he said. “It’s tough every day that goes by.”

“He probably wandered off, and we just need people to help us find him,” Agbasi said. “He’s not someone who would harm anybody. He’s very docile. He’s a very charming kid.”

Agbasi said any public support is appreciated. He also has started an online fundraiser, www.gofundme.com/davikross, as the family hopes to hire a private investigator “to complement the work of the police.” His mother is a widow with limited funds, Agbasi said.

“We know the police do wonderful work, and there’s a lot on their plate,” Agbasi said. “We also want to do something to supplement that.”

Agbasi said the family has a message especially for Davik: “We love you so much and are praying that you come home to us safe and sound. Your mother, siblings, in-laws and extended family miss you and would love to hear from you. We are extremely concerned for your health and safety. We love you, Davik.”

“It’s tough every day that goes by,” Agbasi said. “The wait to hear from Davik is heart-wrenching. We really, greatly appreciate any assistance whatsoever.”

According to the city’s press release from last week, Ross is 5 feet, 11 inches tall and weighs 160 pounds.

The press release also states he may be in the Chesapeake Square area of Chesapeake or the Churchland area of Portsmouth.

A pastor and former director of the Franklin Department of Social Services has been arrested on additional child pornography charges.... read more