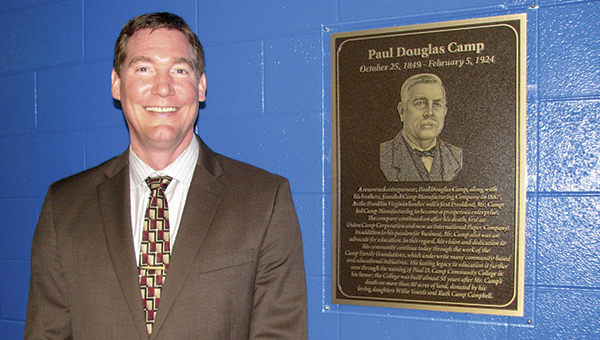 It has been a circuitous route for Dr. Daniel Lufkin from being uncommonly tall to being the president of Paul D. Camp Community College.

But it was, after all, his height — he stands at an imposing 6 feet, 7 inches — that led to him becoming a basketball player. That, in turn, led to his desire to be a high school athletic director, launching his career in education.

A native of upstate New York, Lufkin played basketball for the State University of New York — Potsdam and then went on to continue his education at Northern Arizona University.

It was in his very last graduate class there that his direction began to change.

“My passion was that I really wanted to be an athletic director,” he said.

But after he said that during class, a classmate who worked at a local community college mentioned the college was hoping to start an athletics program.

Soon, Lufkin was working there and accepting more and more positions throughout the years.

“I really started to embrace the community college mission,” he said.

When he left there 10 years later, he was the director of student life, leadership, athletics and wellness, but his native soil was calling.

“I always just had the desire to move back to the East Coast,” he said.

Lufkin was vice president for student affairs at Thomas Nelson Community College for three years and said he and his family “have truly fallen in love with Virginia” during that time.

“It offers safety for my family, and education,” he said. “The college system here is great. There’s so much opportunity at such a high level.”

“The knowledge he was able to share with me about the system was truly invaluable,” Lufkin said of Dever. “He was very helpful in that regard.”

Lufkin said he jumped at the chance to further his career when the position of president at Paul D. Camp became available.

“When the opportunity presented itself, I had to,” he said.

He officially began his duties the first week of July, but he said he won’t be making any wholesale changes right away.

“My main focus in the first six months will be to really get out in the community and find out what the needs are,” he said.

He aims to help the community continue to build a workforce and continue the strong relationships with local high schools that have led to increasing enrollment in the dual enrollment program, which allows students to complete college credits while they’re still in high school.

“I just think there’s so much opportunity in this region, and growth as well,” Lufkin said. “We need to make sure we’re sitting at the table when growth happens and be an integral part of discussions that lead to the economic stability of the area.”

Lufkin said he has been welcomed to the college’s service area, which includes the main campus in Franklin, a campus in Suffolk and a site in Smithfield.

“It’s been very pleasing, the whole experience,” he said, adding the Franklin area reminds him of home in upstate New York. “It’s just reinforced our decision of why we wanted to be a part of this area.”

Lufkin and his wife, Catey, have two children, Lily, 8, and Layton, 4.

“We do want to stay here,” he said, adding they are buying a home in Smithfield. “We want to be contributing members of the community.”