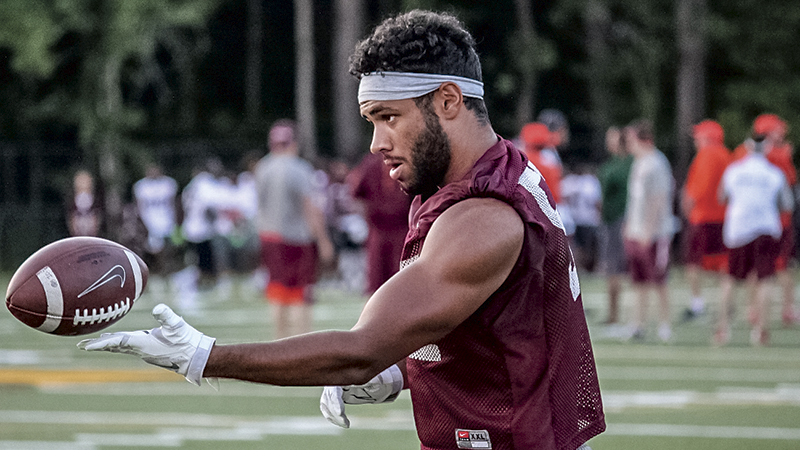 KeShaun Moore, a rising senior at Nansemond-Suffolk Academy, has made a verbal commitment to play football for James Madison University upon his graduation from NSA.

Nansemond-Suffolk Academy rising senior linebacker KeShaun Moore has figured out where he will play football in college.

Moore recently made a verbal commitment to James Madison University.

“I felt really comfortable with the coaches and players being on campus,” he said. “It just felt right. It felt more like a family up there than anywhere else. It felt like I had already been going there, even before I committed.”

Moore said his experiences with the football coaches and players also helped influence his decision.

“I had a previous relationship with (assistant coach) Bryan Stinespring, who recruited me when he was at Virginia Tech a year ago, so I felt comfortable talking to him often,” he said.

Moore selected the Dukes over an overture from Elon, and he drew interest from a host of in-state schools, including Norfolk State, Old Dominion, Richmond and William & Mary.

“I also liked the fact that I could get a chance to play early,” Moore said of JMU. “They’re looking to put me inside at linebacker, but I will play some outside linebacker and a little defensive end while I’m there. The coaches have said they like how fast I move in game and how aggressive I was on film.”

When NSA sent Lew Johnston into retirement a winner in a 38-18 triumph over Atlantic Shores in last year’s state championship game, Moore was a vital ingredient to their success, gaining 130 yards rushing and a touchdown on 16 carries.

The Saints played the Second-Team all TCIS pick at both inside and outside linebacker, along with defensive end, fullback and tight end. Last season, he finished with 80 total tackles, six pass breakups and four sacks defensively, while also rushing for 428 yards and four touchdowns on offense.

“Keshaun is a versatile player that can play multiple positions on defense and has tremendous quickness for a player of his size,” said Mike Biehl, NSA’s new football coach. “He pairs those attributes with tremendous instincts to find the ball and an ultra-physical nature, which makes him one of the best players in the state.”

“I think the possibilities for him at the next level are endless,” Biehl added. “He can play inside linebacker, as well as defensive end with the ability to drop into coverage. If he continues to get bigger, he may even turn into one of the more athletic defensive linemen on their roster. The sky is the limit for this young man, and I’m lucky to have him on my team.”

For his part, Moore is excited about his senior year with the Saints and chasing another state title.

“My goal this season is to help my team in any way I can and to do everything we can as a team to win games,” he said. “We know we have a target on our backs, and I want to lead the young guys we have so we don’t make small mistakes that can lead to losses. Our team goal every year is to win state’s, but we have to take it each game at a time.”

“We want to continue our success and, hopefully, get another state ring,” he added. “I’m not worried about my stats. I just want to help the team in whatever way I can.”

Football players in the Class of 2017 can officially sign their National Letters of Intent in February.

By Henry Luzzatto Correspondent   Old friends and rivals will come together for a good cause during a flag football... read more