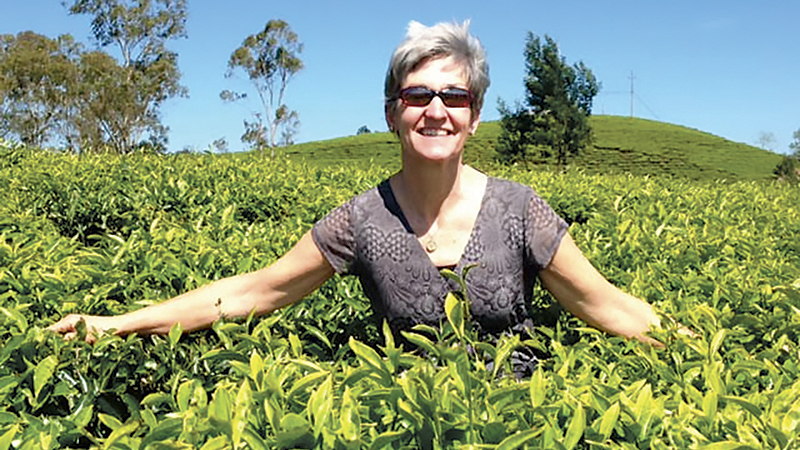 Suffolk farmer Shelley Barlow stands in a field of tea leaves in Vietnam in January. The trip was part of VALOR, an agricultural leadership program offered through Virginia Tech.

Shelley Barlow, who was among the 11 students in this year’s graduating class, said the program helped prepare her for her current leadership roles in agriculture.

“The course taught me how to be more effective and confident in the positions I have,” Barlow said.

Barlow is involved in several agricultural organizations and serves on the Board of Agriculture for the Virginia Department of Agriculture and Consumer Services.

During the two-year program, students were exposed to all aspects of the agriculture industry, from farmers to government officials. The fellows met every other month to explore the commonwealth’s agriculture. The group also traveled to Vietnam to understand agriculture on a global scale.

During their excursions, students learned about the challenges and innovations of family-owned farms, vineyards, dairies and other means of production. The course prepared and challenged the fellows to lead campaigns in their communities to draw attention to agricultural matters.

“This class brought a new level of diverse backgrounds and ideas to VALOR,” program director Megan Seibel stated in a press release.  “As a collective voice, representing individual strengths and interests, they join the alumni in gaining recognition for the profound potential of our program and its fellows.”

A trip the group made to Wise County was especially moving for Barlow. Due to the area’s mountainous terrain, it has made farming difficult in the area. The county, once home to several coal companies, now faces dire economic conditions.

“In some cases, the area looks like a Third World country,” Barlow said. “The people there feel they don’t get the attention they need from the state.”

Today, agriculture is the commonwealth’s largest industry, generating more than $70 billion annually. However, Barlow, who is a farmer herself, said the farming community has gradually fallen to “the bottom of the food chain.”

“Farmers make up less than 2 percent of the population,” she said. “If we don’t tell our story, no one else will.”

“VALOR prepares people to engage in community discourse,” Stephens stated in a press release. “Keeping agriculture a viable industry in our county is beneficial, and all forms of agriculture need to be embraced.”