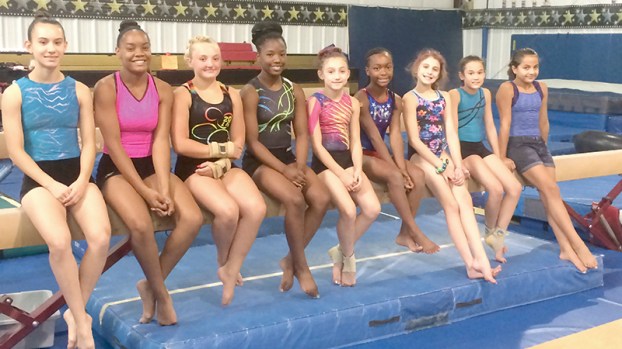 Triple T’s gymnastics team sit together on the balance beam before practice on Tuesday. Team members were excited to watch the the finals of the gymnastics events, which take place throughout the week.

Gymnasts at Triple T Sports Center got to spend the night watching their Olympic heroes this weekend.

Starting Saturday night and stretching on into Sunday, Triple T hosted a sleepover for its gymnasts, during which they ate pizza, played games and watched the qualifying rounds for Olympic gymnastics. 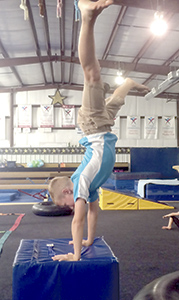 Chris Winoski practices a handstand while at Triple T’s summer camp. Winoski and several other campers spent the weekend at Triple T, watching the qualifying rounds of men’s and women’s gymnastics.

“They had a blast,” said Cheryl Burks, the owner of Triple T. “A lot of the kids that were there are team gymnasts. They’re watching what they want to be one day.”

The young athletes watched both the men’s and women’s qualifying rounds for the gymnastics finals. The night featured incredible performances from a number of athletes, as the U.S. had a solid showing in the men’s section and dominated the women’s.

Though the event was largely for fun, as the kids ate pizza and stayed up late into the night, Burks said young gymnasts can learn at lot from watching top athletes.

“It’s good for them to watch for two reasons,” Burks said. “They get to see the athletes striving to be the best, and they show their backgrounds and how hard they’ve worked. And it’s important for them to see that even the best have bad days.”

Though Burks says it is important for gymnasts to see professionals’ bad days, poor performances were in short supply for Americans at the Olympics.

The U.S. women’s gymnastics team finished in first place in the qualification rounds for the team competition. American gymnasts also took home the top scores in each qualifier for women’s gymnastic events.

On Sunday, the crew that stayed overnight was able to watch the women’s qualifiers, including stellar performances from Virginia Beach native Gabby Douglas.

“It’s great for them to see her,” Burks said. “It brings it closer to home and lets them know they can do it.”

The Triple T gymnasts will be able to see the American Olympic gymnastics teams in October. Triple T will take a bus to Greensboro, N.C., to see the gymnasts on their Kelloggs Tour of Champions on Oct. 27.

“They’ll be able to see them up close and meet them,” Burks said. “I got a chance to see the 1996 team, and it was awesome. The kids will definitely enjoy it.”

Though athletes like Gabby Douglas are big stars for the kids to look up to, Burks said there’s one gymnast all the kids make sure to watch.

“Simone Biles is the big star right now,” she said. “She has dominated the sport for about three years now. They’re all excited about getting to see her.”

The Olympics are good for the kids, Burks said, and also good for gymnastics in the area. Burks said she expects registration to increase because of the Olympics.

“Generally we have an initial boost because of the Olympics,” she said. “The games bring more awareness to the sport.”

By Henry Luzzatto Correspondent Fans of the King’s Fork High School football team got a special midnight preview of the... read more