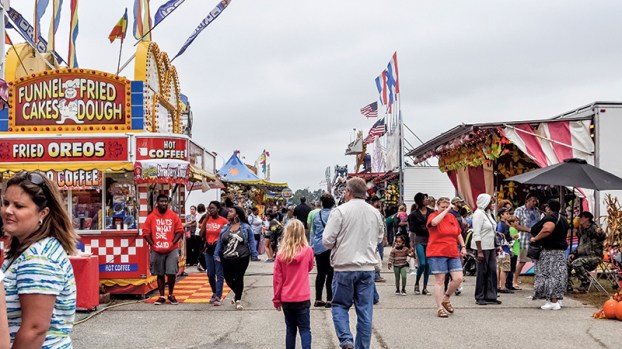 Festivalgoers walk the midway in 2014. This year’s festival will have an admission charge but not a parking fee, a change from past years. Organizers say the change was made to help the festival financially and reduce traffic issues.

The Suffolk Peanut Festival has changed its pricing structure for this year’s fest in order to solve traffic issues and boost the financial viability of the festival.

In past years, festival visitors have paid a parking fee per vehicle but no admission fee. This year, it is reversed — parking is free, but there will be a $10 per person admission fee at the gate during the event, set for Oct. 6-9.

“Based on what a lot of the other festivals in the area are doing, we felt like we were behind the times,” she said. “We’re trying to survive and produce a good event for the community.”

In addition to the festival’s financial viability, Key said, the new process should smooth traffic issues on Carolina Road, since drivers will not have to stop just as they come in the gates.

“We’re trying to speed up the lines,” said Theresa Earles, publicity chair for the festival. “It’s a new effort for us. We expect people will be patient with us.”

Earles also said the festival needs to increase its revenue to keep up with increasing prices for everything it takes to put on the festival.

“We have to do something to bring us up to speed with all the other festivals and ensure we can continue to produce a festival,” she said. “It has to bring in enough funds to support itself for future years.”

While the new price has caused some consternation among would-be festivalgoers, Earles noted there are a lot of deals to help make the cost more reasonable for families and other large groups.

Thursday of the festival will be “Carload Day.” There will be a $40 per vehicle charge, with up to eight people seated legally in the vehicle. That price includes ride wristbands, Earles said.

“Thursday tends to be a slower night,” Earles said. “It will be a great night for the whole family to come.”

On Friday, seniors and children will especially enjoy the free bingo as well as free kiddie rides and other activities.

Sunday will be military day. Active or retired military with their identification will receive 50 percent off their ticket.

“It’s a really nice way to give back to the community,” Earles said.

A four-day pass is available ahead of time for $30. And children 6 and under will receive free admission throughout the festival.

Earles noted all the things that festivalgoers get for no charge once they’re inside — not the least of which is the entertainment, not just on the main stage but on other stages as well.

“You’d be hard-pressed not to find entertainment,” she said.

The mud jam and demolition derby, fireworks, Rad Hatter, silent disco and more are all free with admission.

Earles said it’s hard to predict how the change might affect attendance, since so much of it is weather-dependent.

“I think the diehard fans of Peanut Fest will definitely be there,” she said. “We also might attract some new folks because they see the value of Peanut Fest has increased.”

Earles also noted this year’s Peanut Fest is merged with the Festival of Flight, so it’s like two festivals in one.

Also benefiting Shrimp Feast ticketholders is that they get free admission to the festival with their ticket to Shrimp Feast, an annual Suffolk Ruritan Club fundraiser held the Thursday of festival at the same site.

For more information about Peanut Fest or to purchase advance tickets, visit www.suffolkpeanutfest.com.

A crash on Route 58 eastbound involved three vehicles, including a tractor-trailer, on Friday morning. A crash on U.S.... read more