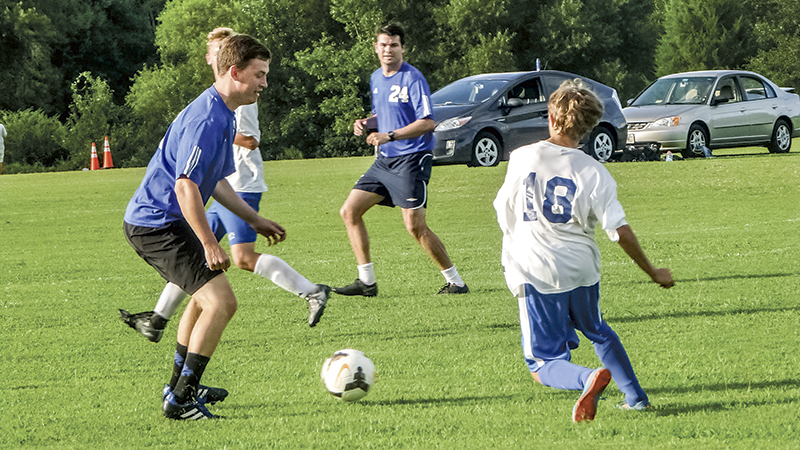 Angelo Tortellini, an eighth grader, faces off against an alumni team featuring his coach, Patrick Whelan. Though the game ended 2-2, Whelan declared the alumni team victors.

The past and the future of Nansemond-Suffolk Academy’s soccer team met on the field on Friday night.

“It’s a great way of giving back,” said head coach Patrick Whelan. “The former players usually enjoy coming back and seeing what the team looks like.”

Whelan said the game offers a positive impact for both current and former players. While the game offered a chance for alumni to relive the successes of high school, Whelan said it also gave current players a look at what their future could hold.

“It’s got a lot of benefits,” he said. “Current players get to see the success of our grads. It shows how great this program is that people want to come back.”

Varsity players and alumni gathered in the fields behind the school at 6 in the afternoon. Alumni got a chance to put on their old uniforms as the players mingled and warmed up.

The event began with a scrimmage on a small field as players still trickled in. When more players arrived, the teams moved to the full-sized field to face off.

Whelan brought the alumni and varsity players together in a huddle before the game started.

“I know it might sound a little cheesy,” Whelan said to the teams, “but it’s pretty cool to see what our alumni have done and that they still want to come back and kick around.”

Even though the goal of the game was to have fun and begin the preparation for the upcoming season, it became clear that both teams wanted to show off their abilities.

Gustav and Christian Berner each went on winding runs through the middle of the pitch, hoping to score goals. Coach Matthew Davies showed off the trickery and skill that made him a talent in high school. Whelan himself, an alumnus of NSA, played everywhere from midfield to goalkeeper, showing his abilities to his young players.

Morgan Davies, class of 2014, went up against her younger brother, Kempton, who was playing in goal for the varsity team.

“It’s awesome to go against him,” said Davies, who attends Randolph-Macon College. “He always tells me he’s better than me, so I get to show him he’s wrong.”

The game ended as a 2-2 draw, which Whelan declared a win for the alumni. After the match, the teams had free sandwiches and drinks, as well as T-shirts for the graduates.

And though the game was mainly meant as a way for varsity players to regain their match sharpness before the season begins, Whelan said the game shows just how much of a community surrounds the sport and the school.

“I’ve been a part of this program for well over 10 years now,” he said, “and to see it grow and succeed like this is a really cool thing to see.”