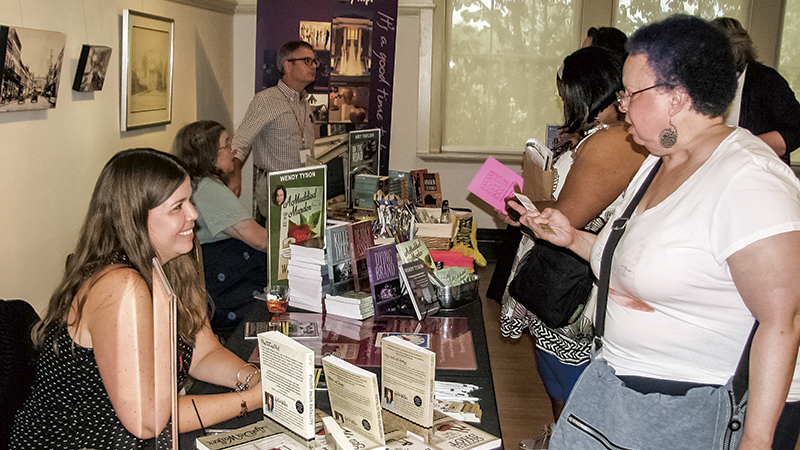 Mystery author LynDee Walker talks with fan Renee Jackson during an author meet-and-greet at the Suffolk Mystery Authors Festival on Saturday at the Suffolk Center for Cultural Arts.

A dozen new mystery authors buoyantly pitched their novels to a mass of readers who circled around the ballroom at the Suffolk Center for Cultural Arts on Saturday.

“This is my debut novel,” Heather Weidner told one browser. “She’s a feisty P.I. out of Richmond … and she gets into way more trouble than I do.”

“It’s based on a true murder in Hampton,” said another author across the room.

“The guy crossed the wrong girl, so she comes back home to even the score,” yet another author said to a reader.

The new author expo was a popular addition to the third annual Suffolk Mystery Authors Festival, an event that has grown each year and continues to draw authors and readers from out of town and even out of state to connect over their shared love of the mysterious written word.

“If you’re an author, it’s great,” said Heather Weidner, one of the new authors. “If you’re a reader, it’s just heaven, because there’s so many authors in one place.”

New author D.B. Corey — the one who wrote about the guy who crossed the wrong girl — came in from Baltimore to participate in the festival. He was selling copies of his two novels, “Chain of Evidence” and “The Lesser Sin.”

The festival included not only the new authors expo but also a VIP meet-and-greet reception, where about 50 ticketholders mingled with 30 bestselling authors.

“I love the authors and love their books,” said Lisa Anderson, a Suffolk resident who is thrilled the festival is right in her backyard. “LynDee Walker, I have read every book she’s written so far. I’m just waiting for her next book.”

“I wanted a chance to meet some of the authors,” she said. “I met some that I’ve heard their name and seen their name on the bookshelf.”

Weidner said the mystery genre is an important subset of literature because many people like to figure it out before it ends.

“I think people like the puzzle aspect of it,” said Weidner, who grew up as a police officer’s daughter and thinks that might have contributed to her work. “I have loved mysteries since Nancy Drew and Agatha Christie and Scooby-Doo.”

Author Bryan Nowak said events such as the festival are important for readers in today’s social media-driven world.

“They’re looking to make a social, for real, connection with the authors,” he said. “It’s really nice to be in one place where readers are connecting with authors.”

For the first time, this year’s festival expanded beyond mysteries to welcome writers and readers of suspense, paranormal, horror, romance and women’s fiction.

“I love the optimism in the genre,” said Kimberly Lang, a USA Today bestselling romance author. “I love love. I love the creation of relationships.”

Guests at the festival — most of which was free, besides the VIP meet-and-greet — were able to purchase books and get them signed and attend author readings, panels and workshops.

One of the panels, attended by more than 30 guests, was titled “Battered and Fried Homicide” and featured five authors talking about culinary themes in their work.

Why include food in a mystery novel? Author Mary Ellen Hughes summed it up nicely.

“You can poison people so easily.”