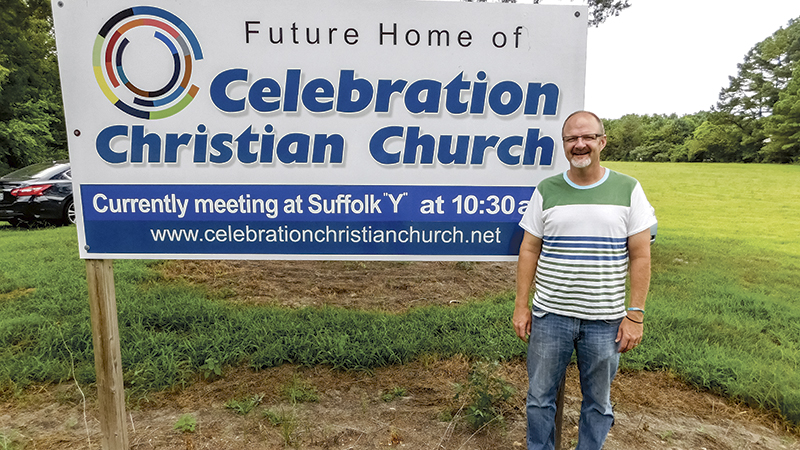 Kirk Dice, senior minister at Celebration Christian Church, stands at what would have been the site of its new church facility. The church plans to sell the land, spanning less than nine acres, and move to another location in the Chuckatuck area.

A Chuckatuck church has decided to sell land where it once hoped to build a new church building.

“There were mixed emotions,” Paul Vaughan, pastor of discipleship and outreach at Celebration Christian Church, said in describing the decision.

The church had planned to use the plot along Route 10 to build a new facility.

“We thought it would be economically viable to sell the land for a good profit,” said Kirk Dice, senior minister of the church.

The church originally purchased the land about four years ago at $170,000. The land, spanning more than eight acres, is currently priced at $250,000, according to Dice.

Once the land is sold, the church plans to use the money toward building another church in the Chuckatuck area.

Celebration, which has a congregation of about 100, currently meets at YMCA Camp Arrowhead on Kenyon Road.

“We thought it was better to stay in the same area that we are currently ministering at,” Vaughan said of Chuckatuck.

Since the land purchase, the church has used the land for various church activities such as prayer gatherings, movie nights and bonfires. The church also hosted a massive Easter egg hunt, attracting more than 300 children and parents.

This year, the church began a five-year campaign to help strengthen its faith relationships, to find a permanent church home and to serve the Western Tidewater community.

In November, the church is coordinating a 5K marathon as one of its community outreach initiatives for its Raise the Bar campaign. There will be a one-mile fun run preceding the marathon.

A majority of the proceeds will go toward non-profit Generosity Feeds, which provides meals for children from low-income families outside of school hours.

Next year, the church and the organization are targeting King’s Fork High School as the site to prepare the meals. The church plans to be involved with Generosity Feeds on a yearly basis, according to Vaughan.