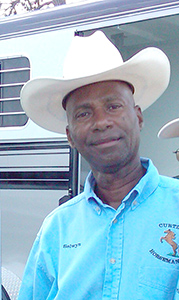 Selwyn George Curtis, 64, passed away at home, Thursday, Aug. 18, 2016, surrounded by his loving family, following a courageous battle with cancer. Born in Chicago, Ill., Selwyn was the son of Ethel Curtis and is preceded in death by his birth father, Corielous Mattews. After high school graduation, Selwyn entered the U.S. Air Force and retired in 1989 after 20 years of service.

A graduate of Embry Riddle, Selwyn continued his education and earned a graduate degree from Longwood University. He served as assistant principal at Dinwiddie High School for three years. He had been the junior Virginia ROTC instructor in Suffolk City Schools at Lakeland High School.

Selwyn was a charter member of the Hampton Roads Buffalo Soldiers Motorcycle Club (HRBSMC) and had also served as the chaplain. He was the proprietor of Curtis Horsemanship and was especially fond of his equine friend, Pretty Boy. A member of Southside Vineyard Church, Selwyn had taken part in various aspects of leadership serving the congregation.

Service arrangements are in the care of Colonial Funeral Home, Carrollton. Family and friends are encouraged to share condolences and remembrances at colonialfuneralhomesmithfield.com.