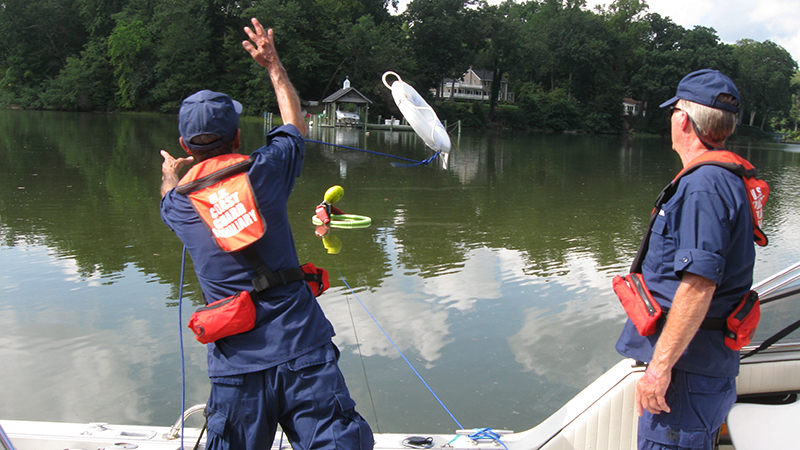 Smithfield’s Flotilla 59 of the USCG Auxiliary “three-peated” at the U.S. Coast Guard District Five’s annual search and rescue competition, DSAR, winning first place for the third year in a row.

The competition was open to the entire southern region of Coast Guard District Five, which includes Maryland, Virginia and North Carolina. It was held at the Coast Guard’s Training Center in Yorktown Aug. 19-20.

Teams were tested on a variety of search and rescue skills including first aid, seamanship, navigation, heaving line throws and operation of a P-6 de-watering pump. Speed and accuracy were both factors in scoring.

New to the competition was an “abandon ship” exercise, in which each team was given the scenario that their boat was sinking and they had less than 10 minutes to decide what to do, and then jump in the water using the proper survival techniques, before the boat was totally submerged.

This year, Flotilla 59 chose to field two separate teams, both of which included members of winning teams from previous years.

Mullen’s team placed first in 10 out of 13 events. Mullen attributes his team’s success to practice and proficiency.

“You can’t just show up and expect to win,” Mullen said. “My team and I have been practicing since early June. Our flotilla emphasizes proficiency in all our operational skills so when we do encounter a stranded boater, we’re ready to help.”

Commander Bowen Spievack, executive officer of Training Center Yorktown, was impressed with the teamwork of every team.

“I feel like I need to join the Auxiliary now,” Spievack said. “It’s fantastic that you’re able to do this.”

The U.S. Coast Guard Auxiliary is the civilian, volunteer branch of the U.S. Coast Guard, tasked with the primary mission of promoting recreational boater safety on local waterways. Smithfield Flotilla 59’s area of operation includes Isle of Wight and Surry counties, parts of Suffolk, the Pagan and Nansemond rivers, and parts of the James River. They meet every third Monday of the month at the American Legion, 818 S. Church St., Smithfield.