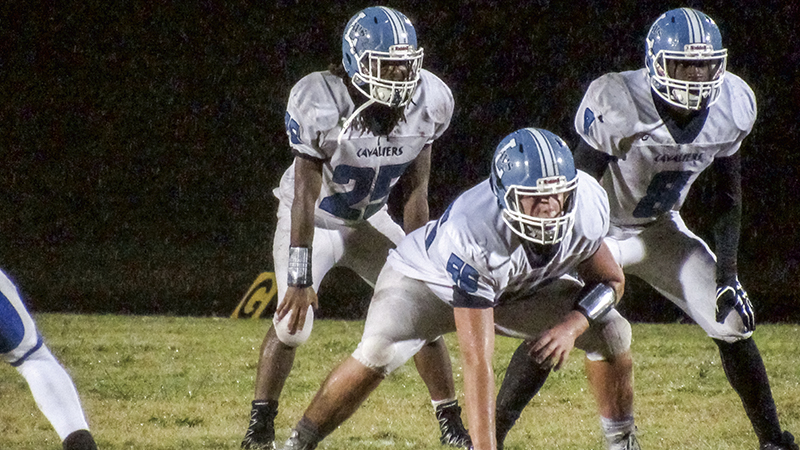 Lakeland High School seniors Riley Richardson(55) Demontria Milteer (25) and Demitrius McKinney (8) line up for a play against Wilson High School in Portsmouth on Friday. The Cavaliers won the game 28-8.

After a slow start on a rainy night, the Cavaliers relied on their ground game to get them the win.

Lakeland High School (1-0) defeated Wilson High School (0-2) by a score of 28-8 at Wilson. Rainfall from an approaching tropical storm didn’t stop the Cavaliers’ desire to grind out a win.

The Cavaliers were led by first-team all-conference running back Demontra Milteer, who had 202 rushing yards on 26 carries.

“This win felt great,” coach Kevin Knight said. “We got something we needed. The weather was bad for us and bad for them, but we got through it. Our guys are starting to believe it is good to get a win like this.”

Neither team scored in the first half Friday night. Even though LHS had opportunities to take advantage of Wilson’s defense, the team could not get points on the board until the second half.

“For most of the first half, we shot ourselves in the foot,” Knight said. “We had penalties that did not do us any favors.”

In the second half, the Cavaliers came out more relaxed. They picked up 458 yards on the night.

Knight said Milteer was primed for a big game because of his preparation during the week. The offensive line also did a good job opening running lanes for their running backs to take advantage.

Wilson’s only score came on a kickoff return in the third quarter. Lakeland had numerous special teams mishaps, as kickoff and punt returners had trouble securing the football. Knight said they will have to clean those mistakes up for the future.

“We take pride in special teams,” Knight said. “It is a priority. We are going to take a look at the film and make sure we are putting the right guys out there to be successful.”

A point of emphasis this year is for Lakeland to score more points. Scoring 28 points is a good way to start improving. Last year the Cavaliers scored more than 25 points in a game only once.

Knight is confident in the team’s offense and gives credit to the staff for putting together a good offensive plan.

For now, Lakeland will enjoy its win, but the players know they still have work to do. The Cavaliers want to put the win behind them and start preparing for their home opener against Western Branch this week, Knight said.

“We want to take each game one game at a time,” senior Garrett Whitley said. “Our goal is to be 1-0 each week.”

Lakeland will be at home against Western Branch High School at 7 p.m. on Sept. 9.

Warriors shut out on a rainy Friday