Glenn Ward, an avid reader for most of his life, wanted to take a stab at writing his own stories. It finally came into fruition this year.

“Jake Slade is set in the future in Chicago,” Ward said. “A woman leads [Slade] into several webs of entry. There are twists and turns you won’t see coming — it keeps you gripped from the beginning.”

However, Ward said he couldn’t have completed the book without the support of community, specifically his family and colleague, Hugh Arrington. 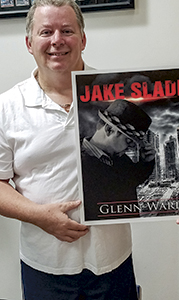 “He’s just incredible,” Ward said. “He would listen to my story ideas and interject with his own.”

Arrington and Ward, both employed with Tidewater Express Towing, which has a location in Western Branch, have only been friends for a few years but they have established a strong rapport with one another.

“He a great guy,” Arrington said. “He’ll break his back to help you.”

Ward held his book release and signing on Aug. 20. He was appreciative of the strong support he received from his neighbors, friends and family.

“Everyone is supporting him,” Arrington said. “He can hardly keep the tears in.”

Ward has completed the second book of the Jake Slade series and is now working on the third. In addition, he is working on a collection of short stories of different genres to include religion, drama, action and science fiction.

Despite taking more than 15 years to finish the novella, Ward is proud of his final product. He encourages aspiring writers to continue working on it, regardless of how long it takes.

Jake Slade is available for purchase at www.empressworldpublishing.com.

Ward, a native of Dayton, Ohio, lives with his wife, Michelle, and his two children. Ward also served in the U.S. Navy for more than 20 years.