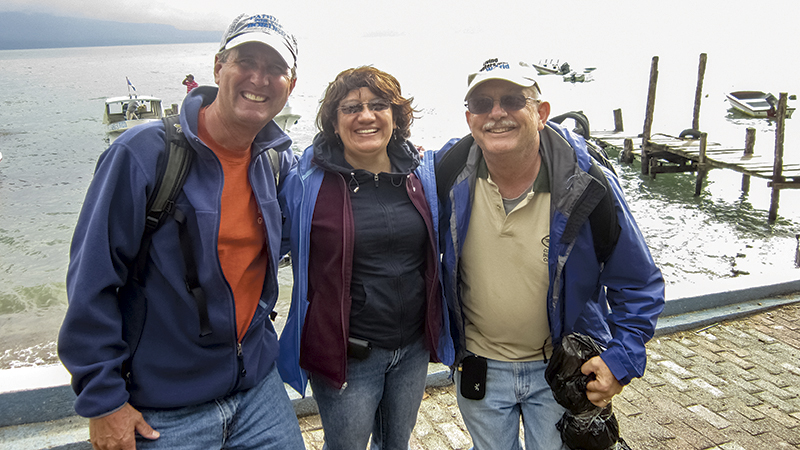 Suffolk Presbyterian Church members Rob Saunders, left, and Jack Stoughton stand with Miriam Mazariegos, a Guatemala coordinator for Living Waters of the World. The church has been involved in the ministry in the Central American country for 10 years, and Mazariegos will speak at an upcoming fundraiser for the mission.

A local church will celebrate the anniversary of its involvement with an international ministry and raise funds for the effort with a fundraiser Sept. 25.

Members of the church who have been on multiple trips to Guatemala are excited for the entire congregation to be able to meet Mazariegos.

“We’re really excited, because we’ve talked about Miriam for 10 years,” said Susie Stoughton. “Now she’s coming, so people in our church will get to see her.”

Members of the congregation make trips frequently to Guatemala to install water purification systems. The team has installed three systems, two in schools and one in a church.

The systems use filtration and ozone purification to catch impurities in the water, which can make people sick. Often, the water is from the municipal supply, which provides transportation but not the quality to which Americans are accustomed.

The team makes two follow-up trips for every installation to deliver parts and supplies and to check on the maintenance of the system. Education on how to use the system effectively is provided during the installation trip. The team also evaluates potential new sites while it is in the country.

Mazariegos is the in-country coordinator, helping arrange lodging and transportation as well as acting as interpreter — not just translator.

“She really understands the culture,” Stoughton said. “She keeps us straight.”

“She has a wealth of experience and a wealth of understanding of the impact Living Waters has had in Guatemala,” Jack Stoughton said. “We’ve seen the villages we’ve worked in, but she’s got a much wider view.”

Rob Saunders, a member of the team who has made 11 trips to the Central American country, said the relationships that have been built are just as important as the water.

“The people have been so appreciative and so loving and so caring every time we’ve been down there that it’s almost as if we’ve established a family,” he said. “I feel like I’m coming to my second home when I go down there.”

The church’s partnership with Living Waters of the World started as part of an effort to become a more missions-oriented congregation, Saunders said. A local outreach, a garden that provides fresh produce to local food pantries, started at the same time and also is still going strong.

The Sept. 25 fundraiser at the church, 410 N. Broad St., will cost $15 per ticket. Advance sales only by Sept. 21 are being accepted. The dinner will feature barbecue, a dessert auction and door prizes and is open to the public.