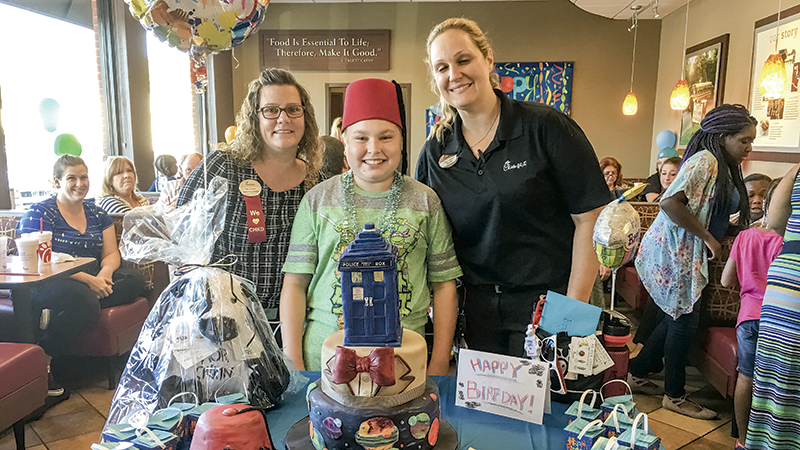 Teri Jernigan, left, marketing director for the Chick-fil-A on North Main Street, stands with Bryan Phelps and the store’s owner, Nicki Dalton, during a birthday party at the restaurant for Bryan, who suffers from Asperger’s syndrome. The surprise party was organized by folks at Chick-fil-A after they saw a post on social media from Bryan’s mother, who had asked folks on Facebook to send her son birthday cards.

Bryan Phelps, who turned 13 on Monday, excitedly recounts all the places he got birthday cards from.

Texas. Illinois. Mississippi. Pennsylvania. Germany. Italy. He’s still counting, but there have been at least 100.

The cards started coming in after his mother, Kimberly Duncan, posted on Facebook back in June that she would like for people to send birthday cards to Bryan.

“He hasn’t had a real birthday party since he was little,” she wrote in the post.

Duncan said on Tuesday she was overwhelmed by the response to the post, which was shared multiple times.

She said she put out the call for cards, because she wanted her son to feel loved.

“We don’t want anybody to feel like they don’t have anybody,” she said. “I’m honestly overwhelmed and truly blown away by the kindness of strangers. A lot of those people don’t know my son.”

Duncan said Bryan “almost fainted” when he got a video message and a birthday card from two of his favorite “Doctor Who” actors, John Barrowman and Simon Fisher-Becker.

The response went beyond just birthday cards. An animal shelter in Michigan named a stray dog Bryan and sent him pictures of his namesake. They’ve promised to update when he gets adopted, Duncan said.

And a class in Turkey that is learning English now wants to correspond with Bryan, Duncan added.

“He didn’t want anything from the birthday cards, other than to know people care,” Duncan said. She said any money in the cards from people they don’t actually know is going to be donated to autism research.

Duncan’s post also was spotted by her friend Nicki Dalton, the owner operator at the North Main Street Chick-fil-A restaurant. The two used to do Girl Scouts together, and Bryan enjoys eating at Chick-fil-A.

“I said, ‘We’ve got to do something for this kid,’” Dalton said. “We decided to throw him a surprise party.”

Family, friends and even a few customers participated in the party.

“I didn’t even know anybody was there,” Bryan said of when he first walked into the party at Chick-fil-A on Monday. “They all yelled ‘Happy birthday,’ and I got scared. Then I saw it and I started crying. It was really amazing.”

“Any way that we can be involved with the community and give back and love on them, that’s why we do what we do,” Dalton said. “Bryan is a special kid and does eat with us pretty often, so we knew there was a need and we wanted to make him feel special.”

Duncan said she is grateful for the attention showered on her son.

“I’ve just never seen a business do anything like that, ever,” she said.