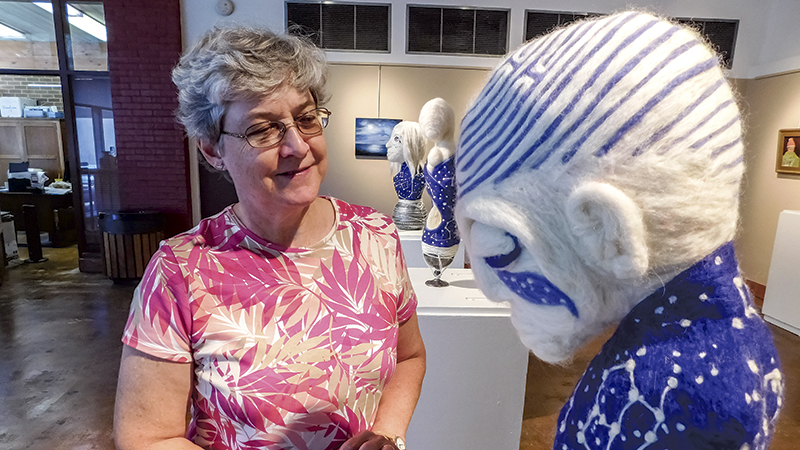 Linda Bunch, executive director at the Suffolk Art League, surveys a piece resembling one of the characters in Lydia Netzer’s book, “Shine, Shine, Shine,” which was selected for this year’s Tidewater Reads program. The artwork in the Verbal2Visual exhibit correlates with the book’s themes of space exploration, romance and self-image.

The Suffolk Art League and the Suffolk Art Gallery are co-sponsoring an exhibit in conjunction with a Hampton Roads reading program.

Since Sept. 6, the city’s art gallery has displayed Hampton Roads artwork that correlates with the themes of Lydia Netzer’s book, “Shine, Shine, Shine.” The Verbal2Visual exhibit, which is free to the public, will conclude on Oct. 21. An opening reception and awards presentation is planned for this Saturday from 4 to 6 p.m.

Netzer’s book was selected for this year’s Tidewater Reads program. Since Aug. 26, nine Hampton Roads libraries have been reading Netzer’s book and hosting a variety events and activities supporting the book’s themes of space exploration, romance and self image.

“The book is quirky and gives artists the opportunity to get visual keys for their artwork,” said Linda Bunch, executive director at the Suffolk Art League.

More than 40 unique and engaging events are planned or have taken place at participating libraries and facilities during the Tidewater Reads program. Among the events is the Family Day with Open Mic taking place at the city’s art gallery on Sept. 24 from 2 to 4 p.m.

Folks of all ages are encouraged to share their family-friendly poems and other written works. There will also be a pop-up library on site and activities for all ages.

“Shine, Shine, Shine” has received critical national acclaim. In 2012, the book was named best book of the year by “Publishers Weekly” and “Library Journal” and it was a named a New York Times Notable Book.

The community feedback on the book has been “very interesting,” Bunch said.

“I’ve heard everything from ‘It’s the craziest thing I’ve ever read’ to ‘It’s very interesting and entertaining’ and everything in between,” she added.

While reviewing the book for Tidewater Reads, Bunch said, the selection committee had trouble giving it a genre classification.

Due to the book’s themes of science fiction and romance, Netzer’s husband gave the book a unique genre label.

“She said her husband labeled it, ‘sci-cry,’” Bunch said.