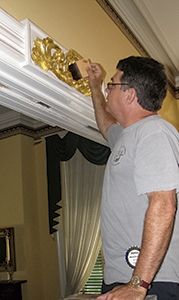 Henrietta King was a dedicated member and volunteer of Riddick’s Folly House Museum, where her husband, Edward L. King, has also been a longtime volunteer and, for the past several years, the director and curator.

When she passed away in January, many friends from far and wide donated to the museum in her memory. Her husband of 30 years knew he had to do something special with the money.

It didn’t take him long to decide on a project. Many years ago, an expert from Colonial Williamsburg had visited the museum to do scrapings on several carvings that adorn the molding around the doorways on the first floor of the historic home. The expert found that the original layer on the carvings was gilt, and someone suggested they eventually gild them again.

“’Henry’ was crazy over the idea,” King said this week, using his nickname for her. “That’s why we kind of chose to do it in memory of her.”

Board member Marcus Gersbach helped with the project on his own time.

“They were good friends,” he said of the Kings.

The two started in April and worked during the evenings for several months to get it done.

It was arduous work. They used a 12-foot ladder to reach the carvings, which were originally produced in 1837 at the James Woodward shop in Norfolk, King said.

They used two layers of priming material to get the carvings — in the shape of acanthus leaves and scallop shells — ready for the 24-karat German gold leaf. Each layer had to sit and dry for a while before the next layer could be put on.

Working with the thin sheets of gold presented a challenge all its own. They could not be touched with hands and instead were brushed onto the carvings with a special brush. The gold was so lightweight that King and Gersbach had to cut the air-conditioning off, lest the sheets of gold fly away.

But after several months of work, they finally finished the project, which included 30 small and two large carvings.

Gersbach said he enjoyed doing the project to honor his friends. He has his own connections to the home besides being a board member — his father-in-law, John “Jack” Howell was in charge of the original restoration of the home.

The gold cost only $1,000, and about $3,550 was given in memory of Henrietta King, her husband said, so there is yet room for more projects in her honor.

In addition to the cash memoriams, nearly $20,000 worth of furniture that was on loan and on display in the home is going to be donated in Henrietta’s memory, King said.

He said he’s happy that the project his wife wanted done so many years ago is finally done in her memory.

“I think it really dresses the room up,” he said.

The first day of the 2016 Peanut Festival saw a steady drizzle for most of the afternoon and evening, and... read more