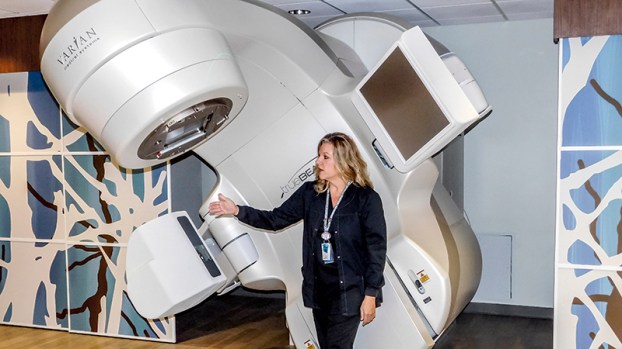 Bon Secours celebrated the official opening of its new cancer institute at the Harbour View Medical Plaza on Tuesday.

The two-story, 58,000-square-foot building, totaling $20 million, will provide cancer care for the western Hampton Roads area, which has cancer rates higher than the national and state averages, according to a Bon Secours press release.

The center, which is located on the first floor of the building, will offer an array of cancer services such as radiation oncology and infusion treatments. The institute anticipates providing more than 8,000 radiation therapy treatments each year.

The second floor is dedicated to the Bon Secours Internists of Churchland and other physician practices.

The building currently houses about 50 staff members and plans to grow its staff in the approaching months, according to Marylou Anton, administration director at the cancer institute.

Research says western Hampton Roads residents have some of the highest rates of cancer occurrence and deaths from cancer in the nation. It is also one of the top three “hot spots” nationwide for colon cancer, according to an American Association for Cancer Research article.

“We are committed to addressing the trend and improving cancer rates for the western Hampton Roads communities with a robust facility and an expert medical team that will offer the latest and most effective cancer treatments in a patient-centric environment,” stated Michael K. Kerner in a press release, chief executive officer for Bon Secours Hampton Roads Health System.

The cancer institute will be the latest addition to the health system’s Harbour View campus, originally established in 1999. This will help facilitate access among the hospital’s buildings.

Anton said there is a national trend of hospitals seeking to consolidate medical services to one campus. Patients “want one-stop care,” she said.

“This leads to better coordination of care,” said Lynne Zultanky, administrative director of marketing and public relations for Bon Secours.

Immediately to the left inside the center is an area reserved for physicians and consulting services. The area is still undergoing renovations and is expected to be complete in the next few months.

The center is divided into two departments, with one side dedicated to chemotherapy services and the other to radiation therapy.

The chemotherapy side has several rooms and cubical areas reserved for treatment. The radiation therapy department houses an advanced Varian linear accelerator and mobile PET and CT devices.

The center develops body molds for the patients, “so they are in the same position everyday” for treatment, said Dr. Judith Blevins, radiation oncologist at the institute. This increases precision and accuracy during treatment and limits the targeting of healthy tissue.

There is also a community education room and cancer resource center on-site. In the near future, the education room will house medical seminars and activities such as yoga for patients.

The hospital plans to adopt the use of nurse navigators to make patients feel more comfortable.

“They provide a feeling of security and assure them they are not alone,” Anton said.

The navigators will assist and remain with patients during the entire care process, if necessary. Once care is completed, they also stay in contact with patients and assist them with post-care plans.

The Suffolk Redevelopment and Housing Authority board voted on its new executive director during a special meeting Tuesday. Tracey Snipes... read more