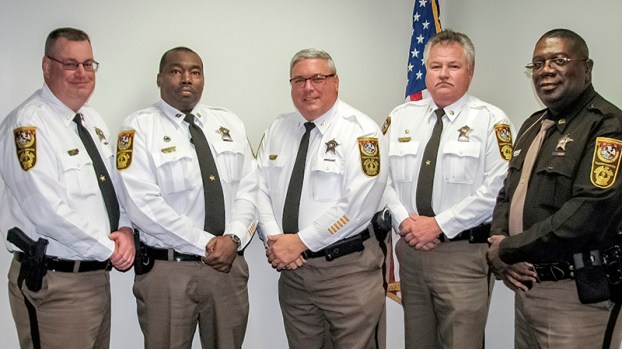 The first changing of the guard in the Suffolk Sheriff’s Office in 23 years already is bringing changes to the office’s staffing and how it operates.

Sheriff E.C. Harris this week announced four promotions that fell in line behind his promotion to sheriff, occasioned by the retirement of longtime sheriff Raleigh H. Isaacs Sr.

The four promotees have a total of 79 years in the Suffolk Sheriff’s Office, and many have additional years in other law enforcement departments.

“They’re community service minded,” Harris said of the four promotees. “To me, that’s the No. 1 priority.”

“It’s quite an accomplishment for me, and I’m proud of it,” said the new major, James Darden. He has been in the sheriff’s office for 29 years.

He’ll be second-in-command in the office and in charge of overseeing the office seeking accreditation through the Virginia Law Enforcement Professional Standards Commission.

Capt. Calvin Bowe, who has 21 years with the office, also has been promoted. He’ll become the director of courthouse security.

“It’s good to be surrounded by good people in the sheriff’s office,” he said.

Lt. Robert Cain, who has been with the office for 12 years, is the third promotee. He will be in charge of training and also the assistant director of professional standards.

“It’s humbling,” he said of the opportunity. “When it does come, you’re grateful and be sure not to take advantage of it.”

Sgt. Nate Goodwin, who has been at the office 17 years, is the fourth promotee. He will be in charge of civil enforcement.

“It’s a great opportunity to be in a managerial capacity,” he said. “I’m looking forward to the new challenges ahead.”

Harris said other operational changes are afoot in the office.

The office is implementing a new records management system and hopes to be able to receive papers for civil process on the go, so papers will not have to be printed at the courthouse and ferried to the zone where they should be delivered, Harris said. Printers in the backseats of the cars should help fix that.

In addition, Harris has assigned each civil process deputy two elementary schools to check on daily. He also hopes to implement the D.A.R.E. (Drug Abuse Resistance Education) program in Suffolk’s schools and have the sheriff’s deputies teaching it.

Area hospitals and health care systems are strongly recommending all patients and visitors wear a mask inside local facilities to... read more