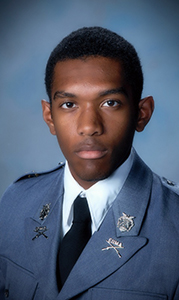 Fork Union Military Academy recently announced that Cadet Jonathan Job Echols II has been promoted to serve as platoon sergeant in Echo Company with the rank of staff sergeant.

Fork Union Military Academy offers unique leadership development opportunities for young men to develop valuable leadership skills that will be used throughout their lives. A cadet who shows responsibility, consistent good conduct and leadership potential can earn rank — first within his company, and perhaps later at the battalion level. Cadet officers lead their platoons and companies under the direct adult supervision of the commandant and the members of his staff, known as tactical officers. These cadet officers learn valuable lessons about responsibility, the use of authority, discretion and leading by example. At Fork Union Military Academy, rank is earned based on merit and achievement.

Cadet Echols, a postgraduate, is the son of Jonathan and Victoria Echols, of Suffolk. He has attended Fork Union Military Academy since August 2016, when he enrolled as a postgraduate.

Fork Union Military Academy, in Fork Union, is a college preparatory military boarding school for young men in grades 7 through 12 and postgraduates. Affiliated with the Baptist General Association of Virginia and open to those of all religious denominations, Fork Union was founded in 1898 and has a rich tradition promoting character, leadership and scholarship.

More than 600 people joined together at the Norfolk Waterside Marriott on March 25 to support ForKids and its work... read more