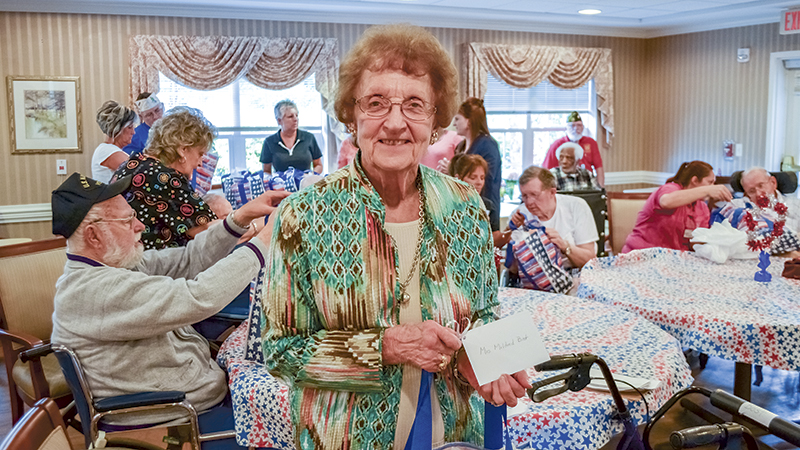 Lake Prince Woods retirement community resident Mildred Bost, 90, enjoys the care package brought to her by AmeriGas Suffolk employees, with the assistance of Joe Bagley Veterans of Foreign Wars Post 2582 members. Bost served for 30 years as a nurse in the U.S. Navy.

Local veterans were recognized and celebrated through a community effort on Tuesday.

Debbie Warren, an AmeriGas customer relations representative, approached the VFW in April about fundraising for the packages in honor of Military Appreciation Month in May.

“It’s because of them we have our freedom,” Warren said. “They put their lives on the line for us. This is just a small token of gratitude and appreciation for them.”

Employees began collecting donations at the end of April, and AmeriGas matched the money they raised to reach about $500 total, Warren said.

AmeriGas employees joined Chism and VFW quartermaster Gary Huband in the dining room at the retirement community, where 11 veterans received the care packages.

Chism said the VFW is interested in holding regular meetings at Lake Prince Woods and other local retirement communities to help the veterans connect with each other and share their stories.

“A lot of history gets turned over back and forth between the vets that most often isn’t heard about,” he said.

The veterans sat together at the dining room table and talked about the 73rd anniversary on Tuesday of the D-Day landings in World War II. They discussed their own experiences in that war and in Vietnam, and the Korean War.

Paul Ayers talked about his years in the navy, starting with his enlistment on June 10, 1943. He said he wanted to join the Navy because that was the branch in which his brother also served at the time.

He retired as a Chief Yeoman in 1964 from Atlantic Reserve Fleet Norfolk Group in Portsmouth.

“I was very happy to do my part,” Ayers said.

Bost was the only woman at the table and the only female veteran in the assisted living, memory and wellness population at Lake Prince Woods.

She was a Navy nurse during the Vietnam War, spending most of her years in operating rooms. During her military career, she was stationed at numerous locales, from Portsmouth to Tokyo.

Members of the VFW will continue to work with community partners like AmeriGas to work with local veterans, show their appreciation and hear their stories.

“We appreciate their service to the country, and they are not forgotten,” Chism said.

Healthy fun for Suffolk in June