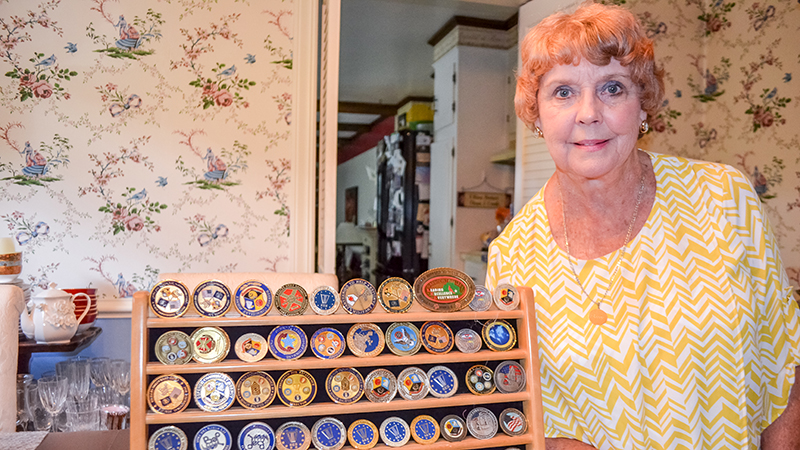 Suffolk resident Thomesine Draper stands with more than 50 of the challenge coins she has received for outstanding work in the military broker industry.

A Suffolk resident has a collection of commendations recognizing more than 50 years of service to the military as a civilian.

Thomesine Draper has spent 56 years in the military broker business. She began her career with 25 years with V.H. Monette and Co, before the company was bought by Overseas Services Corporation.

Through the years, she has received more than 50 challenge coins from the Department of Defense, each one bestowed for outstanding service. Each one is uniquely decorated with striking designs and colors, and each marks a particular achievement in her career.

“I just feel blessed and honored in my professional life to be presented these awards,” Draper said.

One coin was given to her years ago for her assistance in organizing the annual mission breakfast at Naval Base San Diego in California, a feast sponsored by the J.M. Smucker Company that fed a huge number of participants.

“We fed the entire troop on that base,” she said.

Another was for her work on an annual golf tournament held at Fort Lee, located in Prince George County, Va. The tournament raised money for the Fisher House Foundation scholarships for military children.

“One for each tournament over the last eight years,” she added.

The American Logistics Association selected her in 2001 as Outstanding Woman in Resale. She is also a past president of the Hampton Roads ALA chapter and has served as an officer for years.

She continues to broker contracts with companies to secure new products for commissary operations and exchange operations at military bases throughout the world, where military families shop at discounted prices.

She looks forward to adding more years to her career, and perhaps a few more coins.

“I hope to continue to serve these military families as best I can,” she said. “These coins will always be a reminder to the support I have given.”