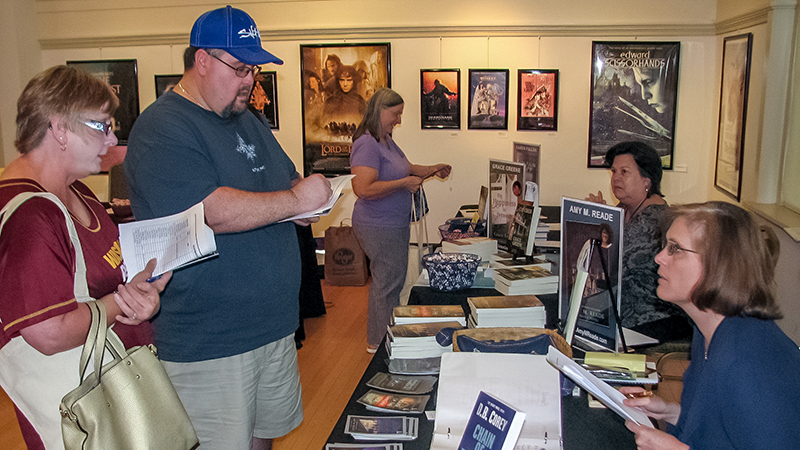 Dozens of mystery authors got the chance to interact with hundreds of readers during the fourth annual Suffolk Mystery Authors Festival on Saturday at the Suffolk Center for Cultural Arts.

The event is sponsored by the Suffolk Division of Tourism. Katie Kelley, festival organizer, said about 500 people were expected throughout the day.

“We’ve actually had a good turnout despite the rain,” she said. “So far, everybody seems to be having a really good time.”

Visitors at the event are mostly from the Hampton Roads area, Kelley said. However, some fans come every year from Richmond, Williamsburg, North Carolina and Washington, D.C., she said.

Fans enjoyed workshops, author panels, a new author showcase and the chance to meet and talk with their favorite authors one on one. Featured authors include mystery, horror, paranormal, romance and women’s authors.

The collegial atmosphere among the authors — many of whom are friends — was on display through a murder mystery game in which they were all suspects. Visitors were expected to talk to each author to gather alibis and eliminate suspects, until finally there was only one person left.

“At the end, there’s only going to be one name with no alibi that had a motive,” said T.J. O’Connor, one of the authors, who created the game after suggesting it to Kelley last year.

“Every year I put on a murder mystery dinner for my family,” he said.

O’Connor is a former government anti-terrorism agent who now is a consultant to a Washington, D.C. think tank. His work doesn’t influence his writing too much, though — his main series, which includes the book “Dying to Know,” involves historically accurate subplots mixed with his own fiction and paranormal happenings.

O’Connor, who lives in Winchester, said he enjoys attending the festival.

“Each year, I think it gets better and better,” he said. “I love the town.”

Greg and Tammy Porter came to the festival for the fourth year in a row for him. She missed last year due to work but was back this year.

“I’ve always liked mystery and intrigue,” he said. “It’s a good way to spend an afternoon.”

The two were collecting clues to find the answer to the murder mystery but hadn’t figured it out yet.

“It’s still way too early to tell,” he said. “Quite a few people think it’s D.B. Corey,” one of the authors whose “evil twin brother” was the victim of the “murder.”

Author Betsy Ashton, who lives at Smith Mountain Lake, said she loves the festival. She and many of the authors attend other festivals throughout the year, but this one is the perfect size, Ashton said.

“I like the intimacy of this event and being able to talk to readers,” she said. “For a writer, there’s nothing better than to chat with a reader about what they like to read.”

“I think they do a great job at accommodating and setting everything up,” Dixon said. “We’ve had good flow in here.”