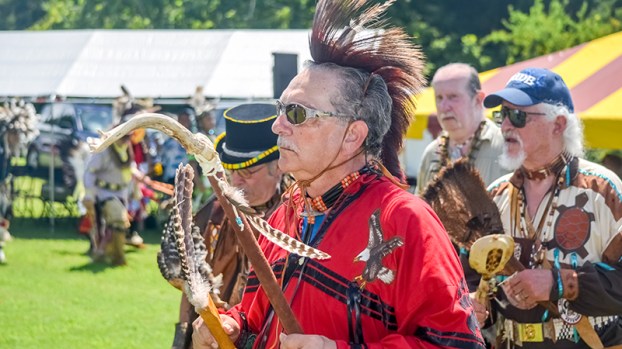 Dancing and heritage at powwow

All of them came to celebrate the culture and heritage of the Nansemond Indian Tribe and the others represented from across the country.

“It’s not just to see our group, but to see other Native American groups,” said Nansemond Indian Tribe member Bob Cantrell. “It is our land, but it’s for all Native Americans to come dress out in their regalia and put a foot down on mother earth.”

The 29th annual Nansemond Indian Tribe powwow brought more than 1,000 visitors to the Mattanock Town historical village by the river on Saturday. Organized in cooperation with the city of Suffolk, this year offered another weekend of festivities and another homecoming for what master of ceremonies Kay Oxendine called their “powwow family.”

Visitors bought crafts and jewelry from vendor tables and enjoyed fry bread, pork barbecue, hamburgers and hot dogs. But the biggest attraction annually has been dancers in full dress at the ceremonial circle by the river.

Dozens of dancers in traditional regalia of many styles and colors paced the circle as tribesmen sang to the beat of a drum. Songs bellowed as the audience sat in complete silence, and they boomed with cheers as the dancing continued.

Military veterans were invited into the circle alongside the tribal dancers as the audience applauded them for their service.

“That’s the one thing they do at all the powwows is honor veterans,” said Nansemond Indian Tribe chief Ronald Lockamy. “If it wasn’t for their sacrifices, we wouldn’t have the freedom to do this.”

The Nansemond Indian Tribal Association invited visitors to observe the progress on their Mattanock Town village and cultural center, and according to assistant chief Samuel Bass, audiences were excited for their offerings.

“They’re very enthusiastic, and they seem to be excited about what’s being accomplished here,” Bass said. “There’s a hunger for this history and for what they feel when they step on these grounds with the drumming and the music.”

David Perry of the Tuscarora Tribe in North Carolina was sweating by the time he stepped into the circle with the other dancers and began moving. He said his spirit animals were birds and that someone watching him could see that in his motions. His goal is to let those spirits guide him as he honors his ancestors with each step.

“We’re just carrying it on for everyone that came before us,” he said.

‘Love conquers all’ A peace rally on Saturday evening did not include a march through downtown as planned but still... read more