Members of the Nansemond River Power Squadron spent hours in the Friday heat searching the cul-de-sac at the end of Cherry Grove Road North. They brought Garmin devices, metal detectors and directions that have long been outdated.

Those directions were from the National Geodetic Survey and were drafted to locate federal survey marks. But they referenced terrain and landmarks that date back decades.

“That is the frustrating part of trying to locate where they are,” said Nansemond River Power Squadron commander Frank Brown.

NRPS executive officer Bob Wallace is spearheading the effort to help the National Oceanic and Atmospheric Administration’s NGS update their records for these marks. 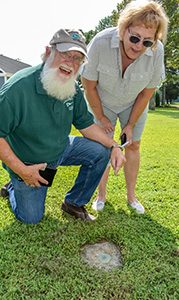 “The maintenance and preservation of these marks is of the upmost importance,” Wallace said.

NGS maintains the National Spatial Reference System, the official reference system of the federal government that allows a user to determine geodetic coordinates and keeps all federal and civilian maps consistent with one another. It is the foundation for all surveying, mapping, charting and positioning activities in the country, according to the NGS website.

NGS maintains the system by updating the shoreline, datums and geoid with the latest technology. A more old-fashioned tracking method, however, is done with more than one million geodetic control marks. These are brass disks three inches in diameter, set in concrete and buried in the ground.

“It’s a built-in check system to see if the newer data matches the older data, and as we keep losing points, it’s going to be harder to check into stuff like that,” said John Aaron, State Geodetic Surveys Engineer with Virginia Department of Transportation. “It’s important to keep as many as we can.”

Wallace counted about 100 marks in Suffolk. His goal is to find these marks, then record any changes to the directions to find each one and other pertaining data, and submit all of it to NGS. In some cases, marks have been destroyed or moved by construction, erosion and other factors that led them astray.

“It’s going to help the NGS folks letting them know they’re actually still out there,” he said.

The directions for one mark on Friday gave directions that refenced the Kings Highway Bridge that closed in 2005. This mark hadn’t been updated in decades, long before the housing in this neighborhood had filled wide open fields, according to treasurer Mary Fisher.

Lee Aliff, who lives in the cul-de-sac with her husband, Mike, was driving by and spoke with the members about their search. Mike led them to one of several marks the couple have noticed since they built their house in 1985.

The squad found the mark in a front yard on the street, designated as Gayle 2. They took pictures, recorded data, then got back to looking for more of them.

“By God, by golly, I am going to find these suckers,” Fisher said.

A historic site in Smithfield is offering delicious refreshments to visitors as they enjoy a day of 17th-century living. Historic... read more